Out of Oz: The Final Volume in the Wicked Years (Paperback) 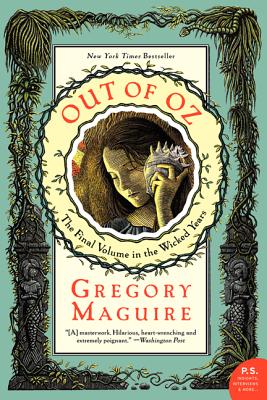 This is book number 4 in the Wicked Years series.

“Maguire’s work is melodic, symphonic, and beautiful; it is dejected and biting and brave. How great that people flock to these magical novels.”
—Los Angeles Times Book Review

Bestselling author Gregory Maguire’s remarkable series, The Wicked Years, comes full circle with this, his fourth and final excursion across a darker, richer, more complex landscape of “the magical land of Oz.” Out of Oz brilliantly reimagines L. Frank Baum’s world over the rainbow as wracked with social unrest—placing Glinda the good witch under house arrest and having the cowardly Lion on the lam from the law as the Emerald City prepares to make war on Munchkinland. Even Dorothy makes a triumphant return in Maguire’s magnificent Oz finale—tying up every loose green end of the series he began with his classic Wicked, the basis for the smash hit Broadway musical.

Gregory Maguire is the New York Times bestselling author of A Wild Winter Swan; Hiddensee; After Alice; Confessions of an Ugly Stepsister; Lost; Mirror Mirror; and the Wicked Years, a series that includes Wicked—the beloved classic that is the basis for the blockbuster Tony Award–winning Broadway musical of the same name—Son of a Witch, A Lion Among Men, and Out of Oz. He lives with his family in New England.

“[A] masterwork…. Concludes…one of the most audacious and successful fantasy series of the past few decades…. Hilarious, heart-wrenching and extremely poignant…. The greatest fantasy series make one want to read them again. That’s what I intend to do with this one.” — Washington Post

“In four books, Maguire has expanded the mythology of Oz from L. Frank Baum’s books and created a land that’s just as rich as Middle-earth or Narnia, and balances the serious with the sublime. . . . Out of Oz is a satisfying finish to the Wicked Years saga.” — USA Today

“Maguire creates a world we can bear, just around the corner. He does this . . . with delicious writing; a tapestry of sentences so carefully imagined they brush over your skin as you read.” — Newsday

“Maguire has crafted a complex, detailed Oz...; populated it with a wide range of characters and histories; created complex, layered plots; and dropped in some magic to bring it all together. His Oz envelops a reader in a feast for the senses and for the mind.” — Wichita Eagle

“A captivating storyteller. . . . Maguire pays subtle homage to Tolkien and Rowling and even Frank Baum while having a grand old time in the fantastically complicated world he has crafted. . . . Action-filled. . . . [a] deliciously fun novel.” — Kirkus Reviews (starred review)

“A worthy conclusion to an imaginative and emotionally searing cultural phenomenon. . . . nobody does fractured fairy tales better than Maguire.” — Booklist

“Engrossing, complex . . . continues to flip the world of Oz on its head while answering new and old questions about Oz and its denizens. Highly recommended.” — Library Journal (starred review)

“[OUT OF OZ] will delight Maguire’s legions of fans, but will surely seduce a whole new world of readers, who can start at the end and go backwards in time to WICKED to understand the breadth and amazing imaginative landscape of his remarkable work.” — Bookreporter.com