A Plague upon Humanity: The Hidden History of Japan's Biological Warfare Program (Paperback) 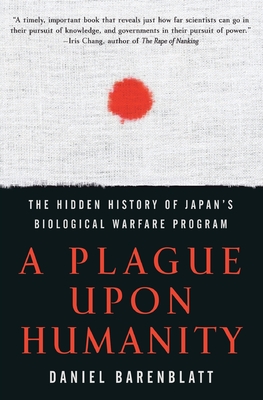 From 1932 to 1945, in a headlong quest to develop germ warfare capability for the military of Imperial Japan, hundreds of Japanese doctors, nurses and research scientists willingly participated in what was referred to at the time as 'the secret of secrets' – horrifying experiments conducted on live human beings, in this case innocent Chinese men, women, and children. This was the work of an elite group known as Unit 731, led by Japan's answer to Joseph Mengele, Dr Shiro Ishii.

Under their initiative, thousands of individuals were held captive and infected with virulent strains of anthrax, plague, cholera, and other epidemic and viral diseases. Soon entire Chinese villages were being hit with biological bombs. Even American POWs were targeted. All told, more than 250,000 people were infected, and the vast majority died. Yet, after the war, US occupation forces under General Douglas MacArthur struck a deal with these doctors that shielded them from accountability.

Provocative, alarming and utterly compelling, A Plague Upon Humanity draws on important original research to expose one of the most shameful chapters in human history.

Daniel Barenblatt holds degrees from Harvard and UCLA, and his writing about the Japanese germ warfare program has appeared in the Washington Post. He lives in New York City.

“Barenblatt exposes horrors that test the limits of human imagination ... A timely, important book.”
— Iris Chang, author of The Rape of Nanking

“An important book, A Plague upon Humanity is as alarming as it is compelling.”
— James Bradley, author of Flags of Our Fathers and Flyboys

“Daniel Barenblatt’s account could not be more timely. A revealing complement to today’s WMD debate.”
— James Fallows, national correspondent, The Atlantic Monthly, and author of Looking at the Sun

“Delivers gripping testimony and long-needed justice to one of the great untold evils of World War II.”
— Craig Nelson, author of The First Heroes

“Eye-opening. Daniel Barenblatt has written a powerful and disturbing book.”
— Ross Terrill, author of Mao and The New Chinese Empire