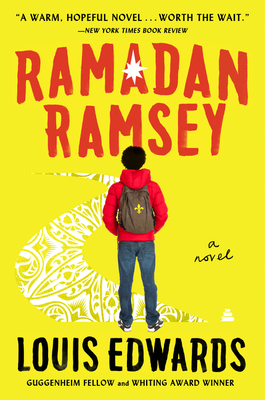 The Guggenheim Fellowship and Whiting Award-winning author Louis Edwards makes his long-awaited comeback with this epic tale of a New Orleans boy whose very creation is so filled with tension that it bedevils his destiny before he is even born.

Spanning from the Deep South to the Middle East, Ramadan Ramsey bridges multiple countries and cultures, entwining two families who struggle to love and survive in the face of war, natural disasters, and their equally tumultuous, private mistakes and yearnings.

Ramadan Ramsey begins in 1999 with the moving (and funny) teenage love story of Alicia Ramsey, a native New Orleans African American young woman, and Mustafa Totah, a Syrian immigrant who works in her neighborhood at his uncle’s convenience store. Through a series of familial betrayals, Mustafa returns to Syria unaware that Alicia is carrying his child.

When the baby is born, Alicia names their son Ramadan and raises him with the help of her mother, Mama Joon. But tragedy strikes when the epochal hurricane of 2005 barrels into New Orleans, shattering both the Ramsey and Totah families. Years later, when Ramadan turns twelve, he sets off to find Mustafa. It is an odyssey filled with breathtaking and brilliant adventures that takes Ramadan from the familiar world of NOLA to Istanbul, and finally Aleppo, Syria, where he hopes to unite with the father he has never known.

Intimate yet epic, heartbreaking yet triumphant, Ramadan Ramsey explores the urgency of 21st century childhood and the richness and complexity of the modern family as a shared global experience. It is also a reminder of Louis Edwards’ immense talent and fearless storytelling and is a welcome return of this literary light.

The Guggenheim Fellowship and Whiting Award–winning has published three acclaimed novels, including Ten Seconds, N, and Oscar Wilde Discovers America. Born and raised in Lake Charles, Louisiana, Edwards attended Louisiana State University in Baton Rouge and Hunter College in New York City. After graduating from LSU with a BA in journalism, he moved to New Orleans, where he has had a decades-long career as a producer of music festivals and other special events. He is currently the chief creative officer and chief marketing officer of Festival Productions, Inc.–New Orleans, which produces the world-famous New Orleans Jazz & Heritage Festival (aka Jazz Fest). He lives in New Orleans.

“One antidote to the darkness, I have found, is a warm, hopeful novel. Louis Edwards has written such a book with his latest, “Ramadan Ramsey” . . . Edwards, a critically acclaimed writer who has received both a Guggenheim fellowship and a Whiting Award, hasn’t published a book-length work in nearly two decades. His new book was worth the wait.” — New York Times Book Review

“An immediate global classic, Ramadan Ramsey joins the ranks of  Sula, Oliver Twist, and Moll Flanders, as a tale named for a character that invites readers into a world both hyper-local and universal. New Orleans has never been more vivid on the page.” — Alice Randall, author of Black Bottom Saints

“Ramadan’s resilience, quick wit, and steadfast spirit render him something of a 21st-century update on the characters of Dickens and Twain. . . . This will have readers enthralled with the beauty of life, despite all its tragedies and sorrows.”  — Publishers Weekly (starred review)

“A young Southern boy travels to the Middle East to find his father in this delightful and intimate modern epic. . . . A novel that is as exhilarating as it is moving; a fine achievement.”  — Kirkus Reviews (starred review)

“Returning to fiction after a long hiatus, Edwards masterfully conveys the sights, smells, and tastes of each setting from the Ninth Ward to Istanbul and Aleppo. Surrounding Ramadan with a Dickensian array of churchgoers, fortune tellers, and hustlers as well as a kind-hearted Turkish cabdriver and Middle Eastern teens obsessed with American sports and music, Edwards vividly dramatizes every turn in his hero's quest to discover who he is.” — Booklist (starred review)