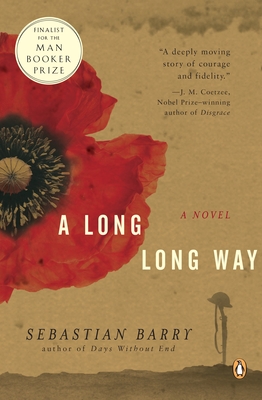 Praised as a “master storyteller” (The Wall Street Journal) and hailed for his “flawless use of language” (Boston Herald), Irish author and playwright Sebastian Barry has created a powerful new novel about divided loyalties and the realities of war.

In 1914, Willie Dunne, barely eighteen years old, leaves behind Dublin, his family, and the girl he plans to marry in order to enlist in the Allied forces and face the Germans on the Western Front. Once there, he encounters a horror of violence and gore he could not have imagined and sustains his spirit with only the words on the pages from home and the camaraderie of the mud-covered Irish boys who fight and die by his side.  Dimly aware of the political tensions that have grown in Ireland in his absence, Willie returns on leave to find a world split and ravaged by forces closer to home. Despite the comfort he finds with his family, he knows he must rejoin his regiment and fight until the end. With grace and power, Sebastian Barry vividly renders Willie’s personal struggle as well as the overwhelming consequences of war.

Sebastian Barry was born in Dublin in 1955. His plays include Boss Grady's Boys (1988), The Steward of Christendom (1995), Our Lady of Sligo (1998), The Pride of Parnell Street (2007), and Dallas Sweetman (2008). Among his novels are The Whereabouts of Eneas McNulty (1998), Annie Dunne (2002) and A Long Long Way (2005), the latter shortlisted for the Man Booker Prize. His poetry includes The Water-Colourist (1982), Fanny Hawke Goes to the Mainland Forever (1989) and The Pinkening Boy (2005). His awards include the Irish-America Fund Literary Award, The Christopher Ewart-Biggs Prize, the London Critics Circle Award, The Kerry Group Irish Fiction Prize, and Costa Awards for Best Novel and Book of the Year. He lives in Wicklow with his wife Ali, and three children, Merlin, Coral, and Tobias.

"Nobody writers better about the trenches of the First World War than Sebastian Barry. In brutally effective prose he lays bare and celebrates the heroism of the young men whose livers were lost on the killing fields of France. His great gift is that he makes you feel he is reporting events that he's witnessed first hand."—Peter Sheridan, author of Everything Inch of Her

"This is Sebastian Barry's song of innocence and experience, composed with poetic grace and an eye, both unflinching and tender, for savage detail and moments of pure beauty. It is also an astonishing display of Barry's gift for creative a memorable character, whom he has written, indelibly, back into a history which continues to haunt us."—Colm Tóibín

"Lyrical...Willie Dunne's voice, like his dilemmas, has the resonance of authenticity."—Hew Starchan, author of The First World War

"A Long Long Way is one of those novels that, as you turn it over in your mind, may just stay with you a long, long time."—The Denver Post