Reluctant Capitalists: Bookselling and the Culture of Consumption (Paperback) 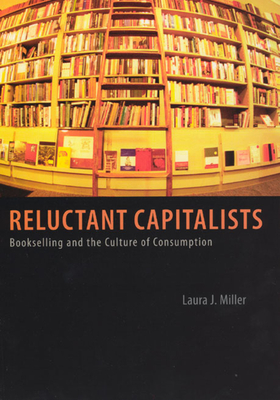 This book gives a great history of bookselling in the twentieth century and demonstrates how the profession of bookselling sits at a perfect crossroads between the curation of culture & commercialism. Also gives a fantastic look at consumer behavior at large and its political / sociological ramifications.

Over the past half-century, bookselling, like many retail industries, has evolved from an arena dominated by independent bookstores to one in which chain stores have significant market share. And as in other areas of retail, this transformation has often been a less-than-smooth process. This has been especially pronounced in bookselling, argues Laura J. Miller, because more than most other consumer goods, books are the focus of passionate debate. What drives that debate? And why do so many people believe that bookselling should be immune to questions of profit?

In Reluctant Capitalists, Miller looks at a century of book retailing, demonstrating that the independent/chain dynamic is not entirely new. It began one hundred years ago when department stores began selling books, continued through the 1960s with the emergence of national chain stores, and exploded with the formation of “superstores” in the 1990s. The advent of the Internet has further spurred tremendous changes in how booksellers approach their business. All of these changes have met resistance from book professionals and readers who believe that the book business should somehow be “above” market forces and instead embrace more noble priorities.

Miller uses interviews with bookstore customers and members of the book industry to explain why books evoke such distinct and heated reactions. She reveals why customers have such fierce loyalty to certain bookstores and why they identify so strongly with different types of books. In the process, she also teases out the meanings of retailing and consumption in American culture at large, underscoring her point that any type of consumer behavior is inevitably political, with consequences for communities as well as commercial institutions.