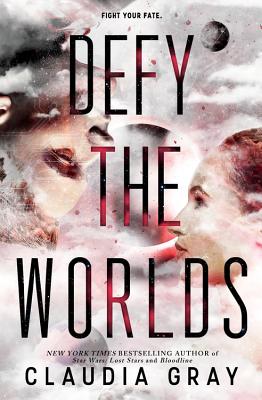 From bestselling author Claudia Gray comes the heart-pounding sequel to Defy the Stars, perfect for fans of The Lunar Chronicles and Illuminae.
She's an outcast from her home -- shunned after a trip through the galaxy with Abel, the most advanced cybernetic man ever created, Noemi Vidal dreams of traveling through the stars one more time. And when a deadly plague arrives on Genesis, Noemi gets her chance. As the only soldier to have ever left the planet, it will be up to her to save its people...if only she wasn't flying straight into a trap.

He's a fugitive from his fate -- on the run to avoid his depraved creator's clutches, Abel believes he's said good-bye to Noemi for the last time. After all, the entire universe stands between them...or so he thinks. When word reaches him of Noemi's capture by the very person he's trying to escape, his depraved creator Burton Mansfield, Abel knows he must go to her, no matter the cost.

But capturing Noemi was only part of Mansfield's master plan. In a race against time, Abel and Noemi will come together once more to discover a secret that could save the known worlds, or destroy them all.

In this thrilling and romantic sequel to Defy the Stars, bestselling author Claudia Gray asks us all to consider where--and with whom--we truly belong.

Claudia Gray is the New York Times bestselling author of many science fiction and paranormal fantasy books for young adults, including the Defy the Stars series, the Firebird series, the Evernight series, the Spellcaster series, and Fateful. She's also had a chance to work in a galaxy far, far away as the author of the Star Wars novels Lost Stars, Bloodline, and Leia, Princess of Alderaan. Born a fangirl, she loves obsessing over geeky movies and TV shows, as well as reading and occasionally writing fanfiction; however, she periodically leaves the house to go kayaking, do a little hiking, or travel the world. She will take your Jane Austen trivia challenge any day, anytime. Currently she lives in New Orleans.

Praise for Defy the Worlds:
"The action raises the stakes, for individuals and entire worlds, and the romance satisfies without overwhelming, right up to a huge cliffhanger ending. A fast, fun follow-up."—Kirkus Reviews

"The story involves nearly constant adventure and suspense along with a complicated slow-burn romance that is sure to delight teen readers. A thrilling science fiction adventure."—SLC

"The taut writing, engaging characters, unique universe, abundant plot twists, and a cliff-hanger finale in this sequel will keep readers on the edge of their seats and wanting more...A must-read."—SLJ

*"Poignant and profound...a tale that examines the ethics of war and tackles questions of consciousness, love, and free will... [The] book's conclusion thrills and satisfies while defying expectations."—Publishers Weekly (starred review)

"A fast-paced thrill ride...Brilliantly done, the book explores what it means to be human."—Romantic Times

"With a love story that sweeps across the galaxy and a heart-racing high-action plot, Defy the Stars brilliantly explores what it means to be human. This book shines like the stars."
—Beth Revis, New York Times bestselling author of the Across the Universe series

"Startlingly original and achingly romantic...Defy the Stars is nothing short of masterful."—Kass Morgan, New York Times bestselling author of The 100 series