Backyard Bears: Conservation, Habitat Changes, and the Rise of Urban Wildlife (Scientists in the Field) (Paperback) 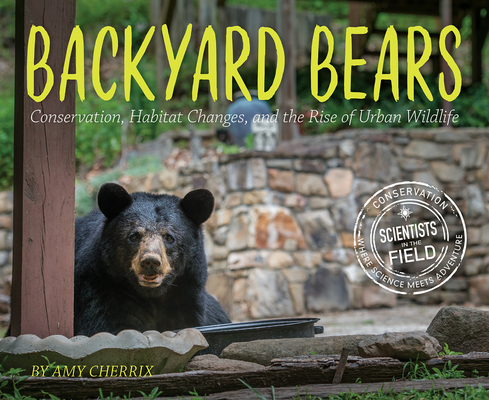 In this acclaimed addition to the beloved Scientists in the Field series, author Amy Cherrix follows scientists investigating black bears—and other animals around the globe—who are rapidly becoming our neighbors in urban and suburban areas, with full-color photography.?

North Carolina's black bears were once a threatened species, but what happens when conservation efforts for a species are so successful that there’s a boom in the population. With black bear numbers on the rise, suddenly these animals are finding themselves in areas they've never been before—like in and around Asheville.

Author Amy Cherrix follows scientists as they study these backyard bears and the local citizens living among them, trying to figure out just how this happened and what it means for bears and their new neighbors.

Part field science, part conservation science, Backyard Bears looks at black bears—and other animals around the globe—whose numbers are not only rising, but thriving, and finding themselves in new locations around the world.

Amy Cherrix earned a master's degree in children's literature from SimmonsUniversity. Some of her books include SITF Backyard Bears, SITF Eye of the Storm, and In the Shadow of the Moon. If she isn't hand-selling books for young readers, writing, or scouring the Internet for late-breaking science news, you can find her on Instagram @amycherrix and Twitter @acherrix.

"Another inviting example of scientific field work in a consistently appealing series."--Kirkus, STARRED review   "The book capably combines the you-are-there immediacy of charting bear behaviors with surprising facts about bears (NC bears don’t do full hibernation; bear pregnancy involves “delayed implantation,” which means months between the conception and the implantation of the embryo) and illuminating information about how humans can best coexist with bears."--The Bulletin of the Center for Children's Books?   "[An] encouraging case study of efforts to manage black bear populations."--The Horn Book Magazine   "Useful introduction to a field of scientific study that will only grow in importance."--School Library Journal —