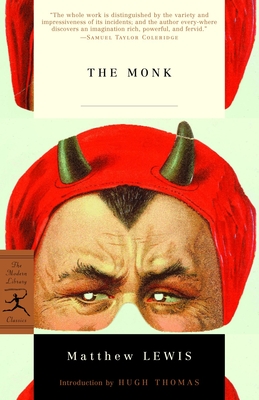 When Matthew Lewis’s The Monk was published in 1796, readers were shocked by this gripping and horrific novel. Lewis’s story, which drove the House of Commons—of which he was a member—to deem him licentious and perverse, follows the abbot Ambrosio as he is tempted into a world of incest, murder, and torture by a young girl who has concealed herself in his monastery disguised as a boy. As Ambrosio spirals into hell, the reader encounters an array of haunting characters: the innocent virgin, the Bleeding Nun, the Wandering Jew, an evil prioress, and Lucifer himself.

This Modern Library Paperback Classic, set from the unexpurgated first edition of 1796, brings to a new generation of readers a timeless classic of gothic fiction that has influenced writers from Byron and Emily Brontë to Poe and Hawthorne.

Hugh Thomas (Lord Thomas of Swynnerton) is widely known for his work on the history of Spain, including his epic masterpiece The Spanish Civil War, available as a Modern Library Paperback.

“The whole work is distinguished by the variety and impressiveness of its incidents; and the author every-where discovers an imagination rich, powerful, and fervid.” —Samuel Taylor Coleridge