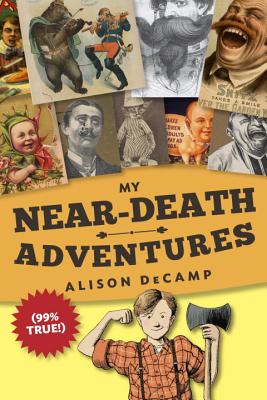 For history lovers and journal fans comes a "hilarious and heartbreaking . . . 99-100% fantastic" (A Fuse #8 Production, School Library Journal) story about a boy on a mission to find his long-lost father in the logging camps of Michigan. There are many things that 11-year-old Stanley Slater would like to have in life--most of all, a father. But what if Stan's missing dad isn't "dearly departed" after all? Armed with his stupendous scrapbook, full of black-and-white 19th-century advertisements and photos, Stan's attempt to locate his long-lost hero/cowboy/outlaw dad is a near-death adventure fraught with pesky relatives, killer lumberjacks, and poisonous pies His tale will leave readers in stitches, but not the kind that require medical attention. Praise for My Near-Death Adventures (99% True )
"A knee-slapper of a debut featuring a narrator who is rather less than 99 percent reliable but 100 percent engaging." --Kirkus Reviews " An] exuberant first novel." --Publishers Weekly "Stan's story is full of his hilarious misunderstandings and overactive imagination. Interspersed throughout are pictures and news clippings embellished with wisecrack remarks, speech bubbles, and the occasional mustache." --Booklist.

Like Stan, Alison DeCamp grew up in the Upper Peninsula of Michigan. Her family history consists of stories of life in lumber camps and old scrapbooks. A graduate of Michigan State University, Alison is a former middle and high school language arts teacher. She now works at Between the Covers, a bookstore in Harbor Springs, Michigan, and spends the rest of her time with her husband and teenage children. You can find her online at alisondecamp.com.