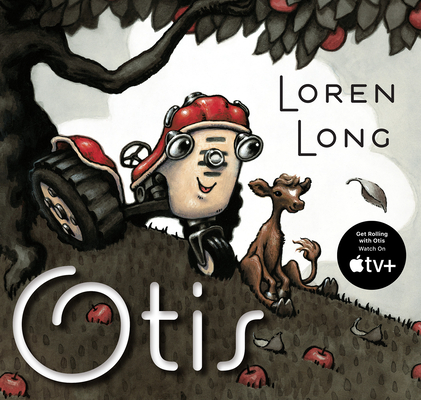 “Otis, an utterly charming, faithful, and determined red tractor, is delighted in the simple pleasures of his farm. When put out to pasture by a bigger, newer tractor, Otis shows what he is made of, and what he can do”
— Rosemary Pugliese, Quail Ridge Books, Raleigh, NC

Watch Get Rolling with Otis on Apple TV!

From Loren Long, the New York Times bestselling illustrator of Change Sings by Amanda Gorman, comes Otis the tractor! A sweet and endearing story of friendship.

Otis is a special tractor. He loves his farm and farmer. He particularly loves the little calf in the next stall, whom he purrs to sleep with his soft motor. The two become great friends, romping in the fields, leaping bales of hay, and playing ring-around-the-rosy by Mud Pond.

But when the big yellow tractor comes to the farm and replaces Otis, he is cast away behind the barn. . . until the little calf gets stuck in Mud Pond. Then there is only one tractor—and it’s not big or yellow—who saves the day. It’s little Otis!

With gorgeous illustrations from the critically-acclaimed Loren Long, this charming and unforgettable story about everyone's favorite little tractor is the perfect bedtime read-aloud!

Loren Long grew up in Lexington, Kentucky. He pursued graduate-level studies at the American Academy of Art in Chicago after graduating with a BA in Graphic Design/Art Studio from the University of Kentucky. After graduation Long worked as an illustrator for a greeting card company in Cincinnati before beginning his career as a freelance illustrator.

Since then, Long has received numerous accolades for his fluid WPA painting style. He has been awarded two gold medals from the Society of Illustrators in New York, and has been frequently selected for their annual exhibition and book. His work has also appeared in many other major annual exhibitions such as American Illustration, Communication Arts, Step By Step Graphics and Print.

Long’s clients include Time Magazine, Reader’s Digest, Forbes, The Wall Street Journal, Atlantic Monthly, Boy’s Life, Land’s End, Sports Illustrated and HBO. He has also illustrated book covers for numerous publishers and has recently concentrated on illustrating books for young readers where his work has garnered much recognition and praise.

The United Nations chose to hang in their lobby Long’s painting of a firefighter in action, along with 21 other selections from the Prevailing Human Spirit Show at the Society of Illustrators.

Recipient of the Golden Kite Award for picture book illustration, presented by the Society of Children's Book Writers and Illustrators for I Dream of Trains. The book was also selected as one of the New York Public Library’s 100 Titles for Reading and Sharing, 2003.

To learn more about Loren Long and his books, go to www.lorenlong.com