The New Orleans Kitchen: Classic Recipes and Modern Techniques for an Unrivaled Cuisine [A Cookbook] (Hardcover) 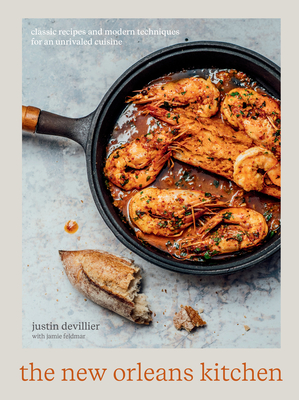 With its uniquely multicultural, multigenerational, and unapologetically obsessive food culture, New Orleans has always ranked among the world's favorite cities for people who love to eat and cook. But classic New Orleans cooking is neither easily learned nor mastered. More than thirty years ago, beloved Paul Prudhomme taught the ways of Crescent City cooking but, even in tradition-steeped New Orleans, classic recipes have evolved and fans of what is arguably the most popular regional cuisine in America are ready for an updated approach. With step-by-step photos and straightforward instructions, James Beard Award-winner Justin Devillier details the fundamentals of the New Orleans cooking canon—from proper roux-making to time-honored recipes, such as Duck and Andouille Gumbo and the more casual Abita Root Beer-Braised Short Ribs. Locals, Southerners, and food tourists alike will relish Devillier's modern-day approach to classic New Orleans cooking.

Justin Devillier, son of a fourth-generation Louisianan, is an avid angler and hunter, and the chef-owner of three nationally lauded restaurants in New Orleans, including La Petite Grocery in the Garden District and Justine in the French Quarter. He was a contestant on Top Chef: New Orleans in 2013, has written for Saveur, was named Chef of the Year by New Orleans magazine in 2014, and won the James Beard Foundation's award for Best Chef: South in 2016 after being named a finalist in 2012, 2013, 2014, and 2015.

Jamie Feldmar is the coauthor of Naomi Pomeroy's Taste & Technique and a contributing writer to the New York Times and the Wall Street Journal, among other publications.

“This is an exquisite ode to the food and traditions of New Orleans from a divinely talented chef. All I want to do is go home and cook everything in here.”—John Currence, Chef/Owner of City Grocery and author of Big Bad Breakfast

“Comprehensive and inventive cookbooks like this one don’t come along very often. The New Orleans Kitchen has become my go-to for bringing the flavors and smells of this glorious cuisine into my home.”—Sean Brock, chef and author of Heritage

"Devillier's cooking manages to be both sleek and wholesome, showcasing vegetables as well as it does veal sweetbreads, and favoring technique and taste equally."—The Times-Picayune