Dragons at Crumbling Castle: And Other Tales (Hardcover) 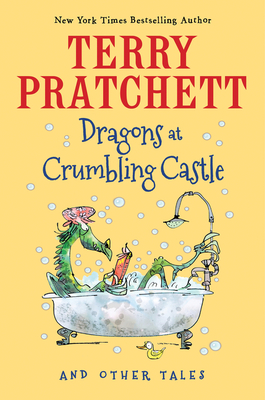 This never-before-published collection of fourteen funny and inventive tales by acclaimed author Sir Terry Pratchett features a memorable cast of inept wizards, sensible heroes, and unusually adventuresome tortoises. Including more than one hundred black-and-white illustrations, the appealingly designed book celebrates Pratchett’s inimitable wordplay and irreverent approach to the conventions of storytelling.
These accessible and mischievous tales are an ideal introduction for young readers to this beloved author. Established fans of Pratchett’s work will savor the playful presentation of the themes and ideas that inform his best-selling novels.

Sir Terry Pratchett, the author of more than three dozen novels, is one of the world's best-selling and best-loved novelists writing in the English language. He wrote his first published story when he was 13 and his first novel, THE CARPET PEOPLE, when he was 17. His books have sold more than 85 million copies worldwide.  In addition to his phenomenal—and phenomenally popular—Discworld series for adults, Terry is the multi-award-winning author several children's books. These include the books of the BROMELIAD TRILOGY (HarperCollins, 2003), as well as THE WEE FREE MEN (HarperCollins, 2003), A HAT FULL OF SKY (HarperCollins, 2004), WINTERSMITH (HarperCollins, 2006), I SHALL WEAR MIDNIGHT (HarperCollins, 2010), NATION (HarperCollins, 2008)—a Michael L. Printz Honor Book, Boston Globe–Horn Book Award winner, and LA Times Book Prize for YA Literature winner—and DODGER (HarperCollins, 2012), for which he won his second Michael L. Printz Honor. He was awarded Britain's highest honor for a children's novel, the Carnegie Medal, for THE AMAZING MAURICE AND HIS EDUCATED RODENTS (HarperCollins, 2001). The recipient of several honorary doctorates, Sir Terry was knighted by Queen Elizabeth II in 2008 for his services to literature. And in 2011, he received the Margaret A. Edwards Award for Lasting Contributions to Young Adult Literature from the American Library Association.
He passed away in 2015 from Alzheimer's Disease. Find out more about Terry at terrypratchettbooks.com and the Facebook page https//www.facebook.com/pratchett (610K fans).

Mark Beech has illustrated numerous books for children, from picture books through young novels. He lives in England. Visit him at markbeechillustration.format.com

"It's a pleasure to read Pratchett's reflections in his introduction and to see his signature warmth, wit, and intelligence light up these simple stories. Appearing throughout the book, Beech's amusing ink-and-wash drawings perfectly capture the magic of the tales reminiscnet of Quentin Blake's illustrations."
—Booklist

"My son and I discovered Terry Pratchett's books together, when he was about eleven years old. He'd be reading on his own and would start to laugh, and then eagerly read the passage aloud to me—and I'd do the same to him! Pratchett's books became a shared source of delight for us back then, and they still are today."
—Linda Sue Park, Newbery Medal winner

"Middle grade readers who enjoy Pratchett's other works or Dalh's tales are bound to enjoy this one."
—School Library Journal