How Not to Kill Yourself: A Portrait of the Suicidal Mind (Hardcover) 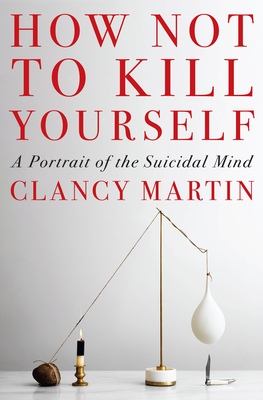 An intimate, insightful, at times even humorous exploration of why the thought of death is so compulsive for some while demonstrating that there’s always another solution—from the acclaimed writer and professor of philosophy, based on his viral essay, “I’m Still Here.”

“If you’re going to write a book about suicide, you have to be willing to say the true things, the scary things, the humiliating things. Because everybody who is being honest with themselves knows at least a little bit about the subject. If you lie or if you fudge, the reader will know.”

The last time Clancy Martin tried to kill himself was in his basement with a dog leash. It was one of over ten attempts throughout the course of his life. But he didn’t die, and like many who consider taking their own lives, he hid the attempt from his wife, family, coworkers, and students, slipping back into his daily life with a hoarse voice, a raw neck, and series of vague explanations.

In How Not to Kill Yourself, Martin chronicles his multiple suicide attempts in an intimate depiction of the mindset of someone obsessed with self-destruction. He argues that, for the vast majority of suicides, an attempt does not just come out of the blue, nor is it merely a violent reaction to a particular crisis or failure, but is the culmination of a host of long-standing issues. He also looks at the thinking of a number of great writers who have attempted suicide and detailed their experiences (such as David Foster Wallace, Yiyun Li, Akutagawa, Nelly Arcan, and others), at what the history of philosophy has to say both for and against suicide, and at the experiences of those who have reached out to him across the years to share their own struggles.

The result combines memoir with critical inquiry to powerfully give voice to what for many has long been incomprehensible, while showing those presently grappling with suicidal thoughts that they are not alone, and that the desire to kill oneself—like other self-destructive desires—is almost always temporary and avoidable.

CLANCY MARTIN is the acclaimed author of the novel How to Sell (FSG) as well as numerous books on philosophy, and has translated works by Friedrich Nietzsche, Søren Kierkegaard, and other philosophers. A Guggenheim Fellow, his writing has appeared in The New Yorker, New York, The Atlantic, Harper’s, Esquire, The New Republic, Lapham’s Quarterly, The Believer, and The Paris Review. He is a professor of philosophy at the University of Missouri in Kansas City and Ashoka University in New Delhi. He is the survivor of more than ten suicide attempts and a recovering alcoholic.

Praise for HOW NOT TO KILL YOURSELF

“Clancy Martin has written an extraordinary, thoughtful book that combines his heartbreaking experience with clear-eyed suggestions. I don’t think I’ve ever read anything quite like it. Required—and, yes, somehow optimistic reading—for anyone interested in this enormous mental health problem.”
— D.T. Max, author of Every Love Story is a Ghost Story: The Life of David Foster Wallace

“A remarkable book—self-flaying in its honesty, harrowing in its dark narrative turns, clear in its philosophizing, and ultimately consoling in its message of hope. Treating sometimes dangerous material with care, How Not to Kill Yourself is illuminating, riveting, and—for those of us who are suffering, or know people who are—potentially life-savingly helpful.”
—Scott Stossel, author of My Age of Anxiety

“In this unusually brave book, Clancy Martin dissects the anatomy of his own suicide attempts and, deploying other people’s stories and a wide range of literary sources, gives voice to the large questions that suicide raises: why some people want to live and others do not; why some fluctuate between the poles; why he is grateful to have survived his attempts but still hears the siren call of self-annihilation.  He writes confidently, philosophically, dramatically, and with great clarity about a life that has been both wondrous and agonizing.”
—Andrew Solomon, author of The Noonday Demon

“Suicide is impossibly difficult to understand but Clancy Martin gives first-person insight into why some choose to kill themselves; importantly, he also gives witness to the kind of hard work it takes for a suicidal person to opt for life.”
—Kay Redfield Jamison, author of An Unquiet Mind and Fires in the Dark

“The most honest, complicit, searing, and discomfiting book I’ve ever read about suicide (and I’ve read quite a few—out of purely scholarly interest, of course). All great narratives pose a battle between the force of life and the force of death; How Not To Kill Yourself does this as brilliantly and powerfully as any book I have encountered in quite some time. Thrilling and useful.”
—David Shields, author of The Thing About Life Is That One Day You'll Be Dead

“Clancy Martin reminds us that the most existential questions around suicide—what drives a person to want to die and what has kept them alive—are not answered by the act itself but by people like him, who have long suffered and are authentically seeking what it means to go on living. He fearlessly and relentlessly asks these questions of himself and is thankfully here today to offer his many valuable lessons, both for those who are struggling with thoughts of suicide and those who work to help them.”
—Dr. John S. Draper, Former Project Director of the National Suicide Prevention Lifeline network