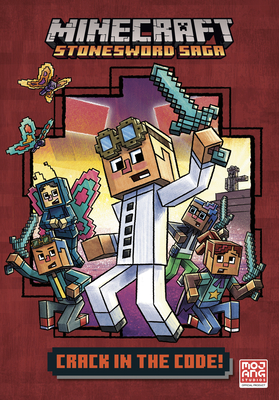 Get ready for next great adventure in the only official Minecraft chapter book series!

Based on the most popular video game of all time, this all-new chapter book series takes a group of intrepid Minecraft players deeper into the game than ever before. Someone--or something--has turned the Evoker King to stone. And now a new player, Theo, has joined the team on their quest to return their former enemy to normal. Theo's has coding skills that could come in handy, but does he have what it takes to be part of the team, or will his meddling put a crack in the game code that none of them will survive?

Nick Eliopulos is the co-author (with Zack Loran Clark) of the middle-grade fantasy novel The Adventurers Guild, which was a Kirkus Best Book of 2017. He's written books for a variety of popular children's series, from Spirit Animals to DC Super Friends, and his comics work has appeared in anthologies Stuck in the Middle and First Kiss (Then Tell). A former children's book editor, Nick now works for Voracious Games as narrative designer on the forthcoming video game Potionomics. He was raised in Florida and lives in Brooklyn.

Chris Hill is an illustrator living in Birmingham, England, with his wife and two daughters and has been loving it for twenty-five years! When he's not working, he loves spending time with his family and trying to tire
out his dog on long walks. If there's any time left after that, he loves to go riding on his motorcycle, feeling the
wind on his face while contemplating his next illustration adventure.