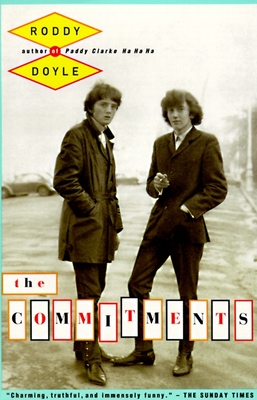 In the first volume of the Barrytown Trilogy, Roddy Doyle, winner of the Booker Prize for Paddy Clarke Ha Ha Ha, introduces The Commitments, a group of fame-starved, working-class Irish youths with a paradoxical passion for the music of Sam Cooke and Otis Redding and a mission—to bring Soul to Dublin. Doyle writes about the band with a fan's enthusiasm and about Dublin with a native's cheerful knowingness. His book captures all the shadings of the rock experience: ambition, greed, and egotism—ans the redeeming, exhilarating joy of making music. The Commitments is one of the most engaging and believable novels about rock'n'roll ever written, a book whose brashness and originality have won it mainstream acclaim and underground cachet.

Roddy Doyle is the author of eleven novels, two collections of stories, two books of dialogues and Rory & Ita, a memoir of his parents. He has written seven books for children and has contributed to a variety of publications including The New Yorker, McSweeney’s, Metro Eireann and several anthologies. He won the Booker Prize in 1993, for Paddy Clarke Ha Ha Ha.