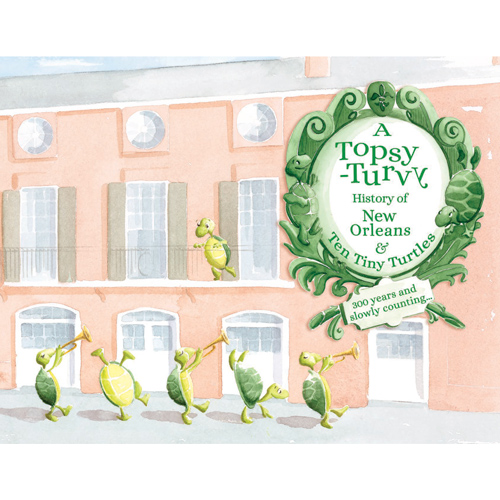 300 years ago, French explorers disembarked from their tall ships, waded ashore, and established the city of New Orleans. To its topsy-turvy history of pirates and parades, battles and brass bands, colorful cuisine, a chess champ, and some very heavy weather, the turtle family of 417 Royal Street has borne quiet witness from its stately courtyard.
Since its construction in 1795 by great-grandfather of Impressionist painter Edgar Degas, the turtles' iconic pink house has served as the first bank in the Louisiana Territory; as a mayor's residence frequented by General Andrew Jackson; and as home to a world renowned chess prodigy -- who once, reportedly, permitted Queen Victoria a victory. For nearly three-quarters of a century, it has been the site of Brennan's restaurant.

Here, for the first time, the present generation of ten tiny turtles -- nine girls and one boy -- reveals the vibrant evolution of this beloved city, and, in particular, the story of one of its most celebrated restaurants.
Renowned for its grand architecture, its leisurely pace, and its gracious hospitality, the city of New Orleans relishes a unique dining culture that ranges delectably from down-home po'boy shacks to fancy Creole restaurants.

The Brennan family established its namesake restaurant on Royal Street in 1955, and it remains under the family's stewardship in the fourth generation. Brennan's legacy includes such contributions to the world of dining as Bananas Foster and Eggs Hussarde -- as well as the celebrated Breakfast at Brennan's. During a majoy renovation in 2014, ten tiny turtles were discovered living in the courtyard. True to New Orleans fashion, it was cause for an annual parade.