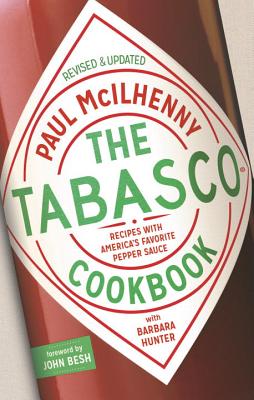 Whether you ask for it by name at restaurants or are one of the legions of people who travel with your own bottle, you know there's no substitute for giving eggs, oysters, and Bloody Marys a kick.

But Tabasco Pepper Sauce is a versatile ingredient for other foods, too. This revised and updated edition of The Tabasco Cookbook includes 20 new recipes for enjoying southern-style classics and American down-home favorites. From perfect fried chicken to a pan of peppery gingerbread, here are 80 recipes to test your fiery food limits—each recipe is rated from "gives flavors a lift" to "not for the meek" according to its piquancy level—and keep you coming back for more.

Filled with vignettes describing the venerable history of the pepper sauce and the family-run company behind it, along with a foreword by renowned New Orleans chef John Besh and beautiful color photographs of the food and Avery Island, Tabasco Pepper Sauce’s birthplace, The Tabasco Cookbook will spice up any cook’s repertoire from breakfast to dessert.

Paul McIlhenny was a fourth-generation family member to produce TABASCO® Sauce. Mr. McIlhenny joined McIlhenny Company in 1967 and served as CEO and Chairman of the Board from 2000 through 2013. During his tenure, Mr. McIlhenny led the company to record growth, introduced new products and flavors, and aided the preservation of Louisiana’s coastal wetlands.

"Finally, a cookbook as lively as the sauce itself!"