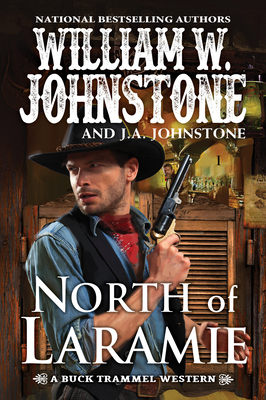 This is book number 1 in the The Buck Trammel Western series.

Johnstone Country. A New Legend in the Making.

The bestselling Johnstones kick off their blazing new western series with a real bang—a fatal, fateful shootout that sends a man named Buck Trammel on the ride of his life . . .

WHEN WYATT EARP TELLS YOU TO RUN, YOU RUN.

Once upon a time in the Old West, Buck Trammel was a Pinkerton agent with a promising future. But after a tragic incident in a case gone wrong, he struck out for the wide-open spaces of Wichita, Kansas. Working as a bouncer at The Gilded Lily Saloon, he hopes to stay out of trouble. But soon enough, his gun skills are put to the test. The Bowman gang shows up, turning a friendly card game with a Wyoming cattleman into a killer-takes-all shooting match. Buck saves the cattleman’s life, but at the cost of Bowman’s two sons. That’s when Deputy Wyatt Earp arrives. He warns Buck that he’d better get out of town, pronto, and take the cattle baron with him. The rest is history—if he lives long enough to tell it . . .

This is the story of Buck Trammel. Hunted by outlaws. Fighting for justice. Marked for death. This is how legends are born . . .

William W. Johnstone is the New York Times and USA Today bestselling author of over 300 books, including the series THE MOUNTAIN MAN; PREACHER, THE FIRST MOUNTAIN MAN; MACCALLISTER; LUKE JENSEN, BOUNTY HUNTER; FLINTLOCK; THOSE JENSEN BOYS; THE FRONTIERSMAN; SAVAGE TEXAS; THE KERRIGANS; and WILL TANNER: DEPUTY U.S. MARSHAL. His thrillers include BLACK FRIDAY, TYRANNY, STAND YOUR GROUND, and THE DOOMSDAY BUNKER. Visit his website at www.williamjohnstone.net or email him at dogcia2006@aol.com.

“Every day with Bill was an adventure story in itself. Bill taught me all he could about the art of storytelling. ‘Keep the historical facts accurate,’ he would say. ‘Remember the readers, and as your grandfather once told me, I am telling you now: be the best J.A. Johnstone you can be.’”