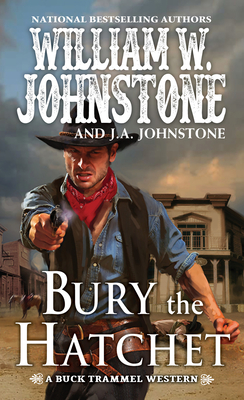 This is book number 2 in the The Buck Trammel Western series.

Former Pinkerton agent Buck Trammel has made quite a name for himself in the Old West. Now he’s got to live up to his own legend—or get gutshot trying . . .

There are two things a man can never escape: his past and his destiny. For Buck Trammel, that past includes a fatal mistake that ended his career as a Pinkerton—and a deadly shootout with the Bower gang in a Witchita saloon. Call it luck or call it fate, but the famous Deputy Wyatt Earp was there to give Buck some advice: Run for your life. Maybe it was Earp’s warning that saved him from the gang’s wrath. Maybe it was destiny that brought him to the town of Blackstone, Wyoming, where his biggest problem is a father-son brewing war. But Trammel’s luck is about to run dry. . .

The gang’s ruthless boss, Old Man Bower, knows where Trammel lives. He’s assembled a small army of gunslingers. He’s hired a Pinkerton with a grudge against Trammel. And he’s coming to town to bury the hatchet . . .

William W. Johnstone is the New York Times and USA Today bestselling author of over 300 books, including the series THE MOUNTAIN MAN; PREACHER, THE FIRST MOUNTAIN MAN; MACCALLISTER; LUKE JENSEN, BOUNTY HUNTER; FLINTLOCK; THOSE JENSEN BOYS; THE FRONTIERSMAN; SAVAGE TEXAS; THE KERRIGANS; and WILL TANNER: DEPUTY U.S. MARSHAL. His thrillers include BLACK FRIDAY, TYRANNY, STAND YOUR GROUND, and THE DOOMSDAY BUNKER. Visit his website at www.williamjohnstone.net or email him at dogcia2006@aol.com.

“Every day with Bill was an adventure story in itself. Bill taught me all he could about the art of storytelling. ‘Keep the historical facts accurate,’ he would say. ‘Remember the readers, and as your grandfather once told me, I am telling you now: be the best J.A. Johnstone you can be.’”