The Fires of Blackstone (The Buck Trammel Western #4) (Mass Market) 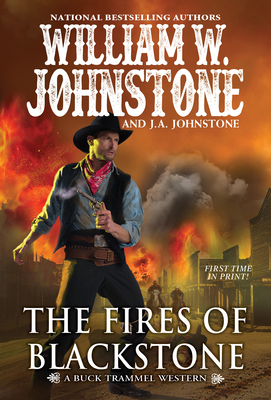 This is book number 4 in the The Buck Trammel Western series.


Keeper of the peace, enforcer of the law, Buck Trammel has faced every kind of killer, outlaw, and prairie rat that’s crawled from the depraved depths of America’s western frontier—with a quick draw and a clean conscience…

“King” Charles Hagen is dead. The empire he carved out of Blackstone, Wyoming, by hook and by crook now lies in the hands of his children. Caleb Hagen has long stood in his father’s shadow, ambitiously plotting, and ready to stake his claim. Young and impetuous BartHagen plans to expand the family legacy across the nation. Debora Hagen’s ruthless nature believes the time has come for a queen to reign over the Hagen kingdom.

Only Adam, their estranged brother, has a different plan. His vengeance against their father requires him to tear down everything “King” Hagen ever built, even if that means shedding family blood. But none of the siblings reckoned that bloodthirsty crime honcho Lucien Clay was prepared to send a murderous pack of gunslingers against them all for control of the territory.

Blackstone has been ruled by lawlessness long enough. The town is Buck Trammel’s jurisdiciton. And he will protect it as judge, jury, and executioner…

Johnstone Country. Where the Sun Never Sets on Justice.

William W. Johnstone is the #1 bestselling Western writer in America and the New York Times and USA Today bestselling author of hundreds of books, with over 50 million copies sold. Born in southern Missouri, he was raised with strong moral and family values by his minister father, and tutored by his schoolteacher mother. He left school at fifteen to work in a carnival and then as a deputy sheriff before serving in the army. He went on to become known as "the Greatest Western writer of the 21st Century." Visit him online at WilliamJohnstone.net.

J.A. Johnstone learned to write from the master himself, Uncle William W. Johnstone, who began tutoring J.A. at an early age. After-school hours were often spent retyping manuscripts or researching his massive American Western History library as well as the more modern wars and conflicts. J.A. worked hard and learned, later going on to become the co-author of William W. Johnstone’s many bestselling westerns and thrillers. J.A. Johnstone lives on a ranch in Tennessee and more information is at WilliamJohnstone.net.