Klan of Devils: The Murder of a Black Louisiana Deputy Sheriff (Hardcover) 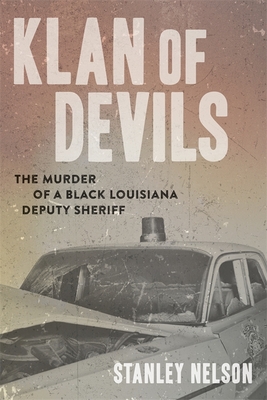 In the summer of 1965, several Ku Klux Klan members riding in a pickup truck shot two Black deputies on patrol in Washington Parish, Louisiana. Deputy Oneal Moore, the driver of the patrol car and father of four daughters, died instantly. His partner, Creed Rogers, survived and radioed in a description of the vehicle. Less than an hour later, police in Mississippi spotted the truck and arrested its driver, a decorated World War II veteran named Ernest Ray McElveen. They returned McElveen to Washington Parish, where he spent eleven days in jail before authorities released him. Afterward, the FBI sent its top inspector to Bogalusa, Louisiana, to participate in the murder inquiry--the only civil rights-era FBI investigation into the killing of a Black law enforcement officer by the KKK. Despite that assistance, lack of evidence and witnesses unwilling to come forward forced Louisiana prosecutors eventually to drop all charges against McElveen. The FBI continued its investigation but could not gather enough evidence to file charges, leaving the murder of Oneal Moore unsolved.

Klan of Devils: The Murder of a Black Louisiana Deputy Sheriff is Stanley Nelson's investigation of this case, which the FBI probed from 1965 to 2016. Nelson describes the Klan's growth, and the emergence of Black activism in Bogalusa and Washington Parish, against the backdrop of political and social change in the 1950s and early 1960s. With the assistance of two retired FBI agents who worked the case, Nelson also explores the lives of the primary suspects, all of whom are now dead, and points to the Klansmen most likely responsible for the senseless and horrific attack.

A finalist for the 2011 Pulitzer Prize in Local Reporting, Stanley Nelson has had his work featured in the New York Times, Washington Post, Los Angeles Times, and on CNN and NPR. Nelson is also the author of Devils Walking: Klan Murders along the Mississippi in the 1960s.