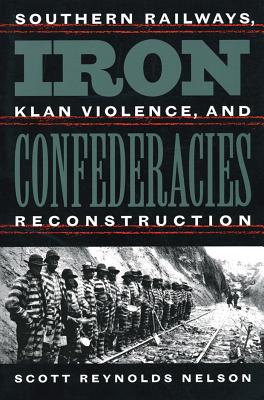 During Reconstruction, an alliance of southern planters and northern capitalists rebuilt the southern railway system using remnants of the Confederate railroads that had been built and destroyed during the Civil War. In the process of linking Virginia, the Carolinas, and Georgia by rail, this alliance created one of the largest corporations in the world, engendered bitter political struggles, and transformed the South in lasting ways, says Scott Nelson.
Iron Confederacies uses the history of southern railways to explore linkages among the themes of states' rights, racial violence, labor strife, and big business in the nineteenth-century South. By 1868, Ku Klux Klan leaders had begun mobilizing white resentment against rapid economic change by asserting that railroad consolidation led to political corruption and black economic success. As Nelson notes, some of the Klan's most violent activity was concentrated along the Richmond-Atlanta rail corridor. But conflicts over railroads were eventually resolved, he argues, in agreements between northern railroad barons and Klan leaders that allowed white terrorism against black voters while surrendering states' control over the southern economy.