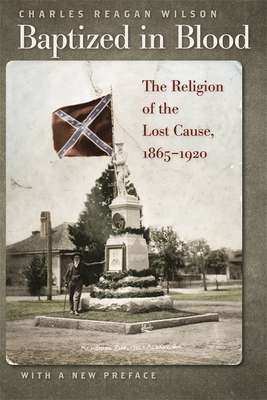 Southerners may have abandoned their dream of a political nation after Appomattox, but they preserved their cultural identity by blending Christian rhetoric and symbols with the rhetoric and imagery of Confederate tradition. Out of defeat emerged a civil religion that embodied the Lost Cause. As Charles Reagan Wilson writes in his new preface, "The Lost Cause version of the regional civil religion was a powerful expression, and recent scholarship affirms its continuing power in the minds of many white southerners.

"Destined to be the definitive essay on the relation between religion and southern regional patriotism."--Journal of Southern History

"This interesting and valuable study breaks new ground in Reconstruction and New South history. . . . What makes this volume significant is both the demonstrated usefulness of the theory of civil religion in the hands of a historian and the fresh substantive contribution to the history of the South's tragic experience."--American Historical Review

"Baptized in Blood persuasively details the power of the Lost Cause message as well as suggests the need to speak about the civil religions (plural) of America."--Religious Studies Review

"Wilson has written a fascinating book in which he has demonstrated more forcefully than other historians have that religion played a significant role in perpetuating the Lost Cause."--History: Reviews of New Books

"This study merits reading not only because it explores the delicate fusion of religious and cultural forces, but also because of the careful research which undergirds its arguments."--Journal of the American Academy of Religion

"An important contribution to a growing body of scholarly literature on civil religion . . . The author's insights are enriched by an obvious grasp of historiography, sociology, and anthropology. Laymen as well as scholars interested in the South and civil religion will want to examine this work."--Journal of Church and State

"Previous historians have portrayed most ministers of the region as enthusiastic apostles of industrialization, but Wilson demonstrates Southern evangelicals' lingering, brooding resistance to these changes."--Catholic Historical Review

"If the South cannot escape its history, perhaps it is because it does not want to. Wilson's magnificent book on the religion of the Lost Cause drives that point home forcefully. . . . He skillfully weaves together the strands of thought that produced the Lost Cause and shows that evangelical ministers had a large hand in the process."--Theology Today