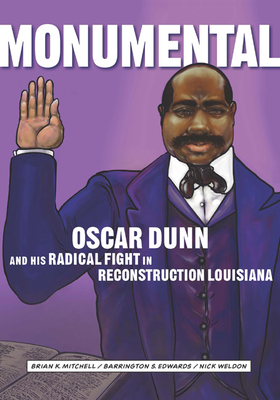 Monumental tells, for the first time, the incredible story of Oscar James Dunn, a New Orleanian born into slavery who became America's first Black lieutenant governor and acting governor. A champion of universal suffrage, civil rights, and integrated public schools, Dunn fought for radical change during the early years of Reconstruction in Louisiana, a post-Civil War era rife with corruption, subterfuge, and violence.

A graphic history informed by newly discovered primary sources, Monumental resurrects, in vivid detail, Louisiana and New Orleans after the Civil War--and presents an iconic American life that never should have been forgotten. Contextual essays and a map and timeline add layers of depth to the narrative. Monumental is a story of determination, scandal, betrayal, and how one man's principled fight for equality and justice may have cost him everything.

Brian K. Mitchell is Assistant Professor of History at the University of Arkansas at Little Rock. Barrington S. Edwards is an award-winning teacher and artist and a publisher of comics and graphic media. Nick Weldon is Associate Editor at the Historic New Orleans Collection.