The Only Woman in the Room: The Making of a Stockbroker (Paperback) 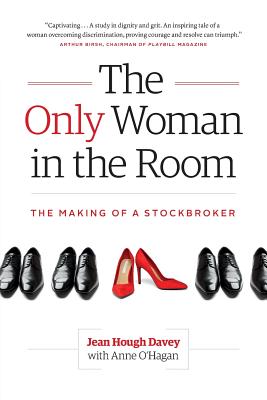 In the 1960s, when women were neither accepted nor encouraged to enter the world of finance, Jean Hough Davey became one of the first women in North America to be licensed as a stockbroker. Propelled by sheer wit and determination, Jean was a pioneer who rose to the highest levels of her profession, eventually becoming Vice President and Director of ScotiaMcLeod.

But while she was publicly lauded, she struggled to maintain equilibrium in her personal life, drowning in an emotionally abusive marriage to Hockey Night in Canada kingpin Ted Hough, and finally summoning up the courage to leave and find true love.

The Only Woman in the Room is Jean Hough Davey's moving account of an exceptional life. In this candid memoir, she shares the many lessons she's learned about how women can--and must--set themselves up for success in every area of their lives, even when the odds are not in their favour.

Jean Hough Davey's career in finance spanned a period of almost 50 years, the first decade of which she was in a category of one--the "only woman in the room." As one of the first female licensed stockbrokers in North America, her remarkable ascent to the highest levels on Bay Street began in the early 1960s, the era of the three-martini lunch and the domination of the old boys' club, a time when women were barely accepted and rarely encouraged to pursue careers in the investment industry.

Before Gloria Steinem came on the scene and well before women started to "lean in," Jean was making her way in what was "a man's world," propelling herself forward with style and determination. By the time she retired in 2004, she was a Vice President and Director of ScotiaMcLeod(R), a division of Scotia Capital Inc., and a member of Scotiabank, Canada's international bank and a leading financial services provider in North America with assets of $896 billion (as at October 31, 2016 ).

Jean Hough Davey now divides her time between Toronto and the Florida Keys.

Praise for The Only Woman in the Room:
"A gripping read, sure to inspire every woman to follow her dreams."
--M.C. Domovitch, author of Scorpio's Kiss and Scar Tissue

"This book is both inspirational and disheartening--the story of one woman's fierce determination to succeed as an investment broker, in an industry dominated by male indifference. That she succeeded is admirable, but indicative that we have a way to go."
--Tom Kierans, past president of McLeod Young Weir (later ScotiaMcLeod)

"As a lifelong business woman, I am always interested in stories about female trailblazers. The Only Woman in the Room is exactly that and so much more. Jean's engaging memoir of how she propelled herself forward in life is so relatable for women like me and, no doubt, women of all ages. And if you love fashion as both Jean and I do, it's even better A really great read."
--Milli Gould LL.D. and Founder, Milli Ltd.

"The Only Woman in the Room is captivating and rewarding. Jean Davey's memoir is a study in dignity and grit. It is an inspiring tale of a woman overcoming discrimination, proving courage and resolve can triumph."
--Arthur Birsh, Chairman of PLAYBILL Magazine