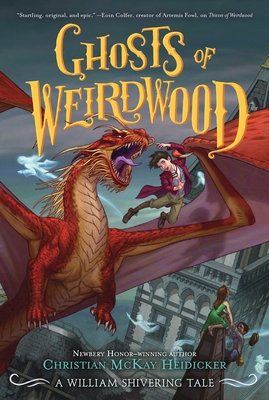 This is book number 2 in the Thieves of Weirdwood series.

In this second action-packed and hilarious Weirdwood adventure, two thieves and their ghost friend wage a battle against a shadowy magical organization intent on opening a Rift between the worlds of the living and the dead.

Fresh off of heroically saving their city from nightmarish monsters, 12-year-old reformed thieves Arthur and Wally are determined to join the Wardens of Weirdwood—defenders of the border between the Real and Imaginary worlds.

Their mission: defeat the Order of Eldar, a shadowy group that exploits the creatures of the Fae for their own gain. When the Order opens what seems to be a Rift between the worlds of the living and the dead, they set up a menagerie of ghosts to make money off those grieving for their lost loved ones.

As spirits begin to cross over into Kingsport, Arthur, Wally, and their ghost companion, Breeth, will have to return a fleet of dead souls to the other side of the Veil.

Perfect for fans of Tristan Strong Punches a Hole in the Sky and Keeper of the Lost Cities.

Christian McKay Heidicker reads and writes and drinks tea. He is the author of the Newbery Honor-recipient Scary Stories for Young Foxes, as well as Cure for the Common Universe and Attack of the 50 Foot Wallflower. With William Shivering, he wrote Thieves of Weirdwood and Ghosts of Weirdwood. He lives in Salt Lake City, Utah.

Professor William Shivering lives in a house by the sea with three cats and a one-eyed raven named Glinda. When he's not writing true stories about fake worlds, he enjoys walking the cliffs and conversing with the moon. He's the president and founder of CASPR (Coalition for the Appreciation of Shades, Phantasms, and Revenants), a non-profit that provides assistance to disembodied peoples. Professor Shivering has an assistant named Christian McKay Heidicker, though he rarely if ever takes Christian's writing suggestions. Mr. Shivering is rarely cold.

Anna Earley is a Midwestern girl living life with a flair for the fantastic along with a coiled, corn snake companion named Moxy. Ever since childhood she has loved creating whimsical creatures and vibrant worlds and characters. That passion led her down the path to become an illustrator. She believes that art has a unique ability to communicate and tell stories that excite the imagination and speak to the soul. When she isn’t drawing, Anna can be found writing, studying history and mythology, roaming the woods, or listening to an ever-growing collection of music.

"This second action-packed adventure is as exciting as the first. . . The plot twists and the cliffhanger ending will have readers clamoring for more." —Kirkus

"Suspenseful and chock-full of age-appropriate humor." —The Bulletin of the Center for Children's Books

Praise for Thieves of Weirdwood

A Bulletin for the Center of Children's Books Best Book of the Year!

"With dazzling wit and enough spooky adventure for this and any alternate universe, Thieves of Weirdwood thrills to the last page. Startling, original and epic." —Eoin Colfer, creator of Artemis Fowl

"An imaginative, page-turning adventure filled with chilling creatures and lovable characters that kept me guessing through every twist and turn." —Shannon Messenger, New York Times bestselling author of Keeper of the Lost Cities

"With a good dose of comedy, a dash of self-awareness, and some riveting plot twists, this book is unique and hilarious." —The Bulletin of the Center for Children's Books

"This series opener's both funny and well paced, and the worldbuilding is fantastic . . . character development is splendid." —Kirkus