I Survived The California Wildfires, 2018 (I Survived #20) (Paperback) 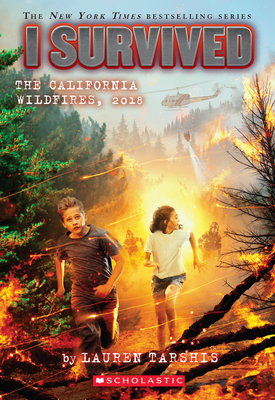 This is book number 20 in the I Survived series.

California continues to be ravaged by devastating wildfires. Lauren Tarshis's heart pounding story tells of two children who battle the terrifying flames and -- despite the destruction -- find hope in the ashes.
The people of Northern California were used to living with the threat of wildfires. But nothing could have prepared them for the devastating 2018 fire season, the deadliest in 100 years and the most destructive in history.

In the 20th I Survived book, readers join eleven-year-old Josh as he leaves his New Jersey home for the rural northern California town where his cousins live. Still reeling from the life-changing challenges that propelled him and his mother across the country, Josh struggles to adapt to a more rustic, down-to-earth lifestyle that couldn't be more different from the one he is used to.

Josh and his cousin bond over tacos and reptiles and jokes, but on a trip into the nearby forest, they suddenly find themselves in the path of a fast-moving firestorm, a super-heated monster that will soon lay waste to millions of acres of wilderness and -- possibly -- their town. Josh needs to confront the family issues burning him up inside, but first he'll have to survive the flames blazing all around him.

Lauren Tarshis's New York Times bestselling I Survived series tells stories of young people and their resilience and strength in the midst of unimaginable disasters and times of turmoil. Lauren has brought her signature warmth and exhaustive research to topics such as the battle of D-Day, the American Revolution, Hurricane Katrina, the bombing of Pearl Harbor, and other world events. She lives in Connecticut with her family, and can be found online at laurentarshis.com.


Praise for I Survived the Destruction of Pompeii, AD 79:


Praise for I Survived the Battle of Gettysburg, 1863:


Praise for I Survived Hurricane Katrina, 2005:

"Expressive illustrations capture the drama of the storm and its aftermath, but the book's real power comes from its exploration of what it means to be a hero." --Booklist


Praise for I Survived the Shark Attacks of 1916:


Praise for I Survived the Sinking of the Titanic, 1912: