The Return of Thelma the Unicorn (Hardcover) 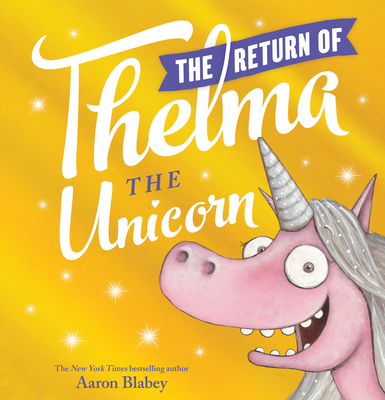 Thelma the Unicorn is back and more fabulous than ever!
The whole wide world was overjoyed!
Her fans all went berserk.
But this time Thelma had her friend
and that's what made it work.

The world misses its favorite unicorn, but Thelma is reluctant to don her horn and sparkles again. However, with the support of her best friend Otis, she realizes the importance of spreading love and joy -- no matter what people think.

Bestselling author Aaron Blabey's sweet and funny follow-up to Thelma the Unicorn will have young readers cheering for Thelma and Otis as they learn to love who they are... even if they don't have sparkles.

Aaron Blabey has written many well-loved, bestselling books for children. He is the creator of three hugely successful series for children -- the New York Times bestselling The Bad Guys, Pig the Pug, and Thelma the Unicorn. In 2018, it was announced that a movie adaptation of The Bad Guys is in development at DreamWorks Animation with Aaron serving as an executive producer on the project. Aaron's books have won many awards, including nine REAL Awards, an INDIE Book Award for Children's Book of the Year, a Children's Book Council of Australia -- Book of the Year Award, a NSW Premiers Literary Award for Children's Literature, two Australian Book Design Awards, and a Children's Peace Literature Award.