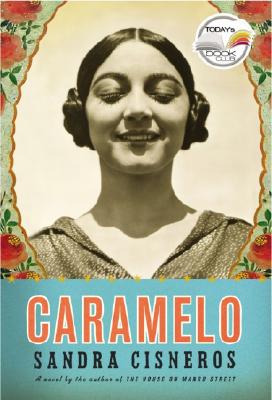 By Sandra Cisneros
$24.00
Email or call for price

The celebrated author of The House on Mango Street gives us an extraordinary new novel, told in language of blazing originality: a multigenerational story of a Mexican-American family whose voices create a dazzling weave of humor, passion, and poignancy–the very stuff of life.

Lala Reyes’ grandmother is descended from a family of renowned rebozo, or shawl, makers. The striped caramelo rebozo is the most beautiful of all, and the one that makes its way, like the family history it has come to represent, into Lala’s possession. The novel opens with the Reyes’ annual car trip–a caravan overflowing with children, laughter, and quarrels–from Chicago to “the other side”: Mexico City. It is there, each year, that Lala hears her family’s stories, separating the truth from the “healthy lies” that have ricocheted from one generation to the next. We travel from the Mexico City that was the “Paris of the New World” to the music-filled streets of Chicago at the dawn of the Roaring Twenties–and, finally, to Lala’s own difficult adolescence in the not-quite-promised land of San Antonio, Texas.

Caramelo is a romantic tale of homelands, sometimes real, sometimes imagined. Vivid, funny, intimate, historical, it is a brilliant work destined to become a classic: a major new novel from one of our country’s most beloved storytellers.

Sandra Cisneros was born in Chicago in 1954. Internationally acclaimed for her poetry and fiction, she has been the recipient of numerous awards including the Lannan Foundation Literary Award and the American Book Award, and fellowships from the National Endowment for the Arts and the MacArthur Foundation. Cisneros is the author of The House on Mango Street, Loose Woman, Woman Hollering Creek and Other Stories, and a children's book, Hairs/Pelitos.

“A lavish, richly textured meditation on family and culture. ”
—Ilan Stavans, The Nation

“There’s certainly much in this long-awaited ‘big’ novel from San Antonio’s Sandra Cisneros. So much incident. So many narrative rabbit trails. So much humor. So much play of language. And, yes, so much humanity.”
—Fritz Lanham, Houston Chronicle

“Caramelo is a novel worthy of the tremendous anticipation that’s built up [around it]. It’s a swirling dinner-table collection of family tales, full of tears and laughter.”
—Ron Charles, Christian Science Monitor

“Cisneros’ finest skill is her descriptive language. It conjures up gorgeous visions of colors and forms…Her use of color, scent, sound and touch is breathtaking…These vignettes remind us that Cisneros is a writer for all people. This is a novel of families, home life and finding yourself in the world’s greater landscape.”
—Carol Memmott, USA Today

“Ten years in the making, Sandra Cisneros’s second novel bursts from between its covers with all the energy of a riotous family fiesta. Emotions are in living color—raw, intricate and as brightly variegated as that most desirable of rebozos—the shawl they call the caramelo. This long-awaited second novel is potentially a watershed in U.S. Latino literature….”
—Adriana Lopez, Washington Post Book World

“Imaginative…charming…Cisneros weaves tales from her own childhood with fabulous fiction, whipping up the story of Lala and her eccentric Mexican and Mexican-American family. Guided by Lala’s narration of her grandparents’ and parents’ histories, Caramelo engages in a kind of playfulness (‘Tell me a story, even if it's a lie’ is the quote that opens the book) that is utterly bewitching.”
—Rebecca Ascher-Walsh, Entertainment Weekly

“With Caramelo, her exuberant, overstuffed novel, Cisneros undertakes storytelling on a grand scale, detailing the struggles and joys of three generations of a family, evoking a subtle panorama of cultural shifts. Her characters leap from the page in all their flawed humanity, falling in and out of love, squabbling and making up, working hard and making do.”
—Jane Ciabattari, Los Angeles Times

“It is Cisneros’ unique use of language that lifts Caramelo from the category of a very fine novel and situates it among the great literature of our time.”
—Margaret Randall, The Women’s Review of Books

“It’s as if she has poured her entire life into a metafictional fable that combines the thematic richness of the most ambitious literature with the delight in character and plot of the most engrossing page-turner.”
—Don McLeese, Chicago Sun-Times

“Lovingly, passionately woven…this is a huge, pan-generational, big-shouldered effort about identity, loyalty, loss, truth-telling, story-telling and, of course, memory, a little history, a little more gossip, a few terrible secrets and a thousand ‘healthy lies’ all pieced together into something as multishaded, raw-edged and timeless as that heirloom, great-grandmother’s caramelo shawl.”
—Margaria Fichtner, The Miami Herald

“A joyful, fizzy American novel. Cisneros writes poetry as well as prose, and her language is a lovely fusion of Spanish and English, idea and emotion, geography and spirit…This is one of those novels that blithely leap across the border between literary and popular fiction…Vivid…boisterous….playful…a delicious reminder that ‘American’ applies to plenty of territory beyond the borders of the United States.”
—Valerie Sayers, The New York Times Book Review

“Poet and writer Cisneros's sprawling, spirited Caramelo, her first novel since her hugely successful The House on Mango Street, revisits Chicago's Mexican-American community—this time to retrace the story of the raucous, loving family of Lala Reyes, which stretches back through some tough years in San Antonio, Texas, to its roots in Mexico City…a tumultuous and eventful history. Vibrant and big-hearted like Lala herself, Cisneros's prose captures both the personal intimacies and the larger-than-life atmosphere of the Reyes family's passionate saga.”
—Lisa Shea, Elle

“Sandra Cisneros is like a bee that extracts new honey from old flowers. And Caramelo is like a Mexican candy that you suck slowly, savoring it under your tongue for hours; yet it is never sticky, never sugary nor sentimental. Cisneros possesses that most difficult ability—to allow us to imagine that which never existed.”

—Elena Poniatowska, author of Here’s to You, Jesusa

"Writers tell secrets, and in so doing, reaffirm the truths of our lives, the strength of love, the marvel of endurance, and the power of generations. In Caramelo, Sandra Cisneros sings to my blood. Her words are sweet and filling, not sugar-driven but as substantial as meat on the bone. Hers is the kind of family I know well—people who love and hate with their whole souls, who struggle and make over with every generation. She has done them justice on the page; she has given them to us whole."
—Dorothy Allison, author of Bastard Out of Carolina

"It's a crazy, funny and remarkable folk-saga of Mexican migrants told by a curious little girl who has the wisdom of an old grandma. Beginning on Highway 66, it's a salsified variant on the Joad family's odyssey, zigzagging from Chicago to Mexico City and back. It's all about la vida, the life of 'honorable labor.' It's a beautiful tale of all migrants caught between here and there."
—Studs Terkel, author of Will the Circle be Unbroken

"This book is a crowded train, a never-stop round-trip train going and coming back and going again between Mexico and the USA, across the frontiers of land and time: full of voices, full of music, made from memory, making life."
—Eduardo Galeano, author of Memory of Fire and Upside Down