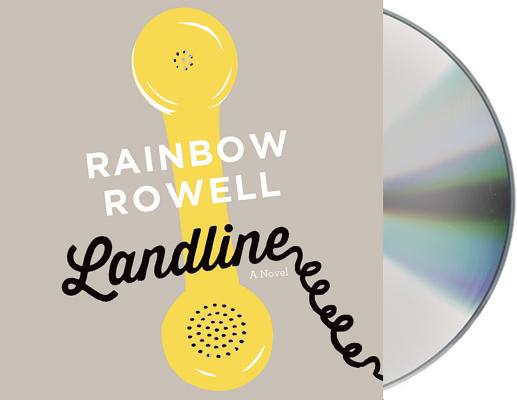 By Rebecca Lowman (Read by), Rainbow Rowell
$29.99
Email or call for price

“Georgie McCool's professional dreams are coming true and she couldn't be happier, except that it means the slow implosion of her marriage is about to speed up. Georgie's husband, Neal, and their kids leave for Christmas while Georgie stays behind to work on her new TV show and she is left alone with memories of when things were better. Those memories almost become reality when she discovers that her mother's landline can connect her with Neal in 1998, before he proposed. Landline is an incredibly emotional, honest, and often hilarious look at a marriage on the brink and the choices that must be made when dreams aren't enough.”
— Paige Mushaw, Northshire Bookstore, Manchester Center, VT

From the New York Times bestselling author of Eleanor & Park and Fangirl, comes a hilarious, heart-wrenching take on love, marriage, and magic phones.

Two days before they're supposed to visit Neal's family in Omaha for Christmas, Georgie tells Neal that she can't go. She's a TV writer, and something's come up on her show; she has to stay in Los Angeles. She knows that Neal will be upset with her-Neal is always a little upset with Georgie-but she doesn't expect to him to pack up the kids and go without her.

When her husband and the kids leave for the airport, Georgie wonders if she's finally done it. If she's ruined everything.

That night, Georgie discovers a way to communicate with Neal in the past. It's not time travel, not exactly, but she feels like she's been given an opportunity to fix her marriage before it starts. . . .

Is that what she's supposed to do?

Or would Georgie and Neal be better off if their marriage never happened?

“Lowman captures the sweetness and vulnerability of the couple's college courtship; there are intimate moments, spoken slowly and seductively, that are lovely and voyeuristic, including the couple's first kiss.” —Publishers Weekly

“A fantastic recording of an equally fantastic novel. Rebecca Lowman's narration deftly captures the pacing of this tale, and her impressive ability to portray distinct voices enhances the listening experience.” —Library Journal