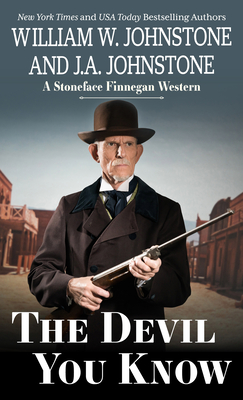 Legendary bestselling Western authors William W. Johnstone and J.A. Johnstone return with the blazing sequel to By the Neck, a new adventure featuring Stoneface Finnegan, the former Pinkerton agent now serving up shots of justice as the owner of a boomtown saloon in Idaho Country.
JOHNSTONE COUNTRY. LOOKING FOR TROUBLE? THEN LOOK NO FURTHER.

As a Pinkerton agent, Stoneface Finnegan faced the deadliest killers in the West. But now that he runs a saloon, he serves them hard liquor--with a shot of harder justice...

THE DEVIL WALKS INTO A BAR Stoneface Finnegan and his new partner are busy renovating The Last Drop Saloon when a very unusual stranger comes to town. He's nothing like the prairie rat drifters, world-weary miners, and would-be outlaws who normally pass through Boar Gulch. No, he's a big handsome devil from San Francisco, Giacomo Valucci. Valucci fancies himself an actor, but his all-too-dramatic arrival is no act. He's come to kill Stoneface Finnegan... Finnegan's gut tells him that someone's put a price on his head. Maybe one of his cutthroat enemies from his Pinkerton days. Or maybe not. Giacomo Valucci seems more interested in playing the role of Jack the Ripper. He's carving a path of mayhem and murder across the American West--and saving Stoneface Finnegan for the last act...and the final curtain. Live Free. Read Hard.

William W. Johnstone is the USA Today and New York Times bestselling author of over 300 books, including Preacher, The Last Mountain Man, Luke Jensen Bounty Hunter, Flintlock, Savage Texas, Matt Jensen, The Last Mountain Man; The Family Jensen, Sidewinders, and Shawn O'Brien Town Tamer . His thrillers include Phoenix Rising, Home Invasion, The Blood of Patriots, The Bleeding Edge, and Suicide Mission. Visit his website at www.williamjohnstone.net or by email at dogcia2006@aol.com. Being the all-around assistant, typist, researcher, and fact checker to one of the most popular western authors of all time, J.A. Johnstone learned from the master, Uncle William W. Johnstone. He began tutoring J.A. at an early age. After-school hours were often spent retyping manuscripts or researching his massive American Western history library as well as the more modern wars and conflicts. J.A. worked hard--and learned. Every day with Bill was an adventure story in itself. Bill taught me all he could about the art of storytelling. 'Keep the historical facts accurate, ' he would say. 'Remember the readers, and as your grandfather once told me, I am telling you now: be the best J.A. Johnstone you can be.'