The Lions of Lucerne (The Scot Harvath Series #1) (Mass Market) 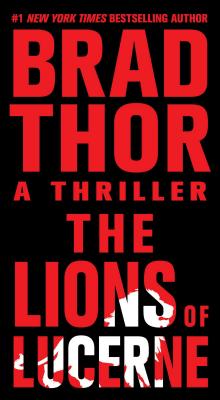 This is book number 1 in the The Scot Harvath Series series.

In his daring and chilling first novel, #1 New York Times bestselling author Brad Thor draws us into a sinister labyrinth of political intrigue and international terrorism, serving up an explosive cocktail of unrelenting action as one man is pushed to the edge.

On the snow-covered slopes of Utah, the President of the United States has been kidnapped and his Secret Service detail massacred. Only one agent has survived—ex-Navy SEAL Scot Harvath. He doesn’t buy the official line that Middle Eastern terrorists are behind the attack and begins his own campaign to find the truth and exact revenge. But now, framed for murder by a sinister cabal, Harvath takes his fight to the towering mountains of Switzerland—and joins forces with beautiful Claudia Mueller of the Swiss Federal Attorney’s Office. Together they must brave the subzero temperatures and sheer heights of treacherous Mount Pilatus—where their only chance for survival lies inside the den of the most lethal team of professional killers the world has ever known…

Brad Thor is the #1 New York Times bestselling author of twenty thrillers, including Near Dark, Backlash (one of Suspense Magazine’s Best Books of the Year), Spymaster (“One of the all-time best thriller novels”—The Washington Times), The Last Patriot (nominated Best Thriller of the Year by the International Thriller Writers Association), Blowback (one of the “Top 100 Killer Thrillers of All Time” —NPR), and The Lions of Lucerne. Visit his website at BradThor.com and follow him on Facebook at Facebook.com/BradThorOfficial and on Twitter @BradThor.