Alycat and the Cattywampus Wednesday (Hardcover) 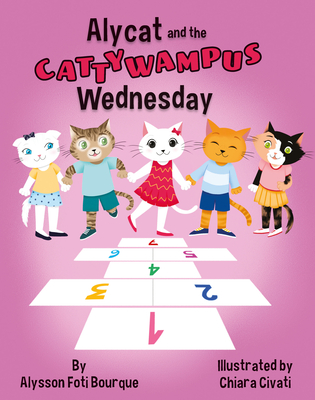 Alycat wakes up to seafood gumbo for breakfast, and even though her house is the first stop for the school bus, the bus is already full when she boards. Alycat's whole day is turning topsy-turvy. What is happening? Young readers will tag along on Alycat's adventures during her very "cattywampus" Wednesday and learn that a little help from some friends and a good attitude can make your day

The themes of the books in the Alycat Series all reflect a reliance on friendships, imagination, and creativity towards problem solving. The character traits of Alycat and her friends inspire and encourage young readers to find their own special gifts.

The Alycat Series features: Alycat and the Thursday Dessert Day, Alycat and the Monday Blues, Alycat and the Friendship Friday, Alycat and the Tournament Tuesday, Alycat and the Cattywampus Wednesday, and Alycat and the Sleepover Saturday. The books in this series have won more than 17 awards, including the NYC Big Book Award, the Mom's Choice Awards, and the Next Generation Indie Book Awards; have been featured in Kirkus Reviews and Publishers Weekly; and have appeared in the Oscars celebrity swag bag and the Grammy Awards gift bag. Sarah Ferguson, the Duchess of York, featured Bourque and her life-size mascot, Alycat, on her popular YouTube channel Little Red News.