Code of Conduct: A Thriller (The Scot Harvath Series #15) (Hardcover) 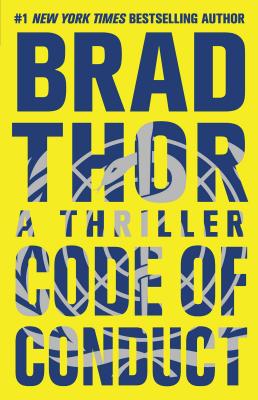 This is book number 15 in the The Scot Harvath Series series.

“Feels like the TV show 24 on the page.” —The Associated Press

"Code of Conduct succeeds fantastically at being an engaging and fast-paced thriller with characters that leave their mark on the reader…Fans of political and covert military ops thrillers will love this book."
— Quick Book Reviews

"Counterterrorism operative Scot Harvath dives deep into another world-shattering plot with personal ramifications in Code of Conduct....Thor tackles the fear of terrorism and makes it both a scary and an exciting read."
— Associated Press

"Brad Thor has a knack for writing tense thrillers with complex and disturbing political underpinnings. If you like political thrillers...or shows such as 24...you should definitely check out this series."
— 4LN--Four Letter Nerd

"Every time I read a new Brad Thor novel, I’m convinced that it is the best one yet. The man just keeps stepping up his game!"
— ArmsVault

“For those missing Jack Bauer and his 24 exploits, Harvath provides a page-turning alternative with a no-matter-what determination and ‘Heck yeah, America!’ patriotic machismo.”
— USA Today

“One of the best writers you are ever going to read.”
— WROK

“Thor’s most ambitious, prescient and wondrously realized book yet reads like the best of James Bond sprinkled with just enough of a Vince Flynn’s Mitch Rapp-like edge…a thinking man’s thriller quilted in an action-adventure fabric that’s Thor at his very best.”
— Providence Journal

"A prescient thriller by a writer with a knack for pointing the looking glass forward at what’s about to come…I predict Code of Conduct will be one of the best hardcore thrillers of the year."
— Providence Journal

"This is kick butt, pedal to the metal, ultra high stakes poker and Thor is just the person to deliver the knock outs."
— MenReadingBooks.com