Magnus Chase and the Gods of Asgard, Book 3 The Ship of the Dead (Special Limited Edition, The) (Hardcover) 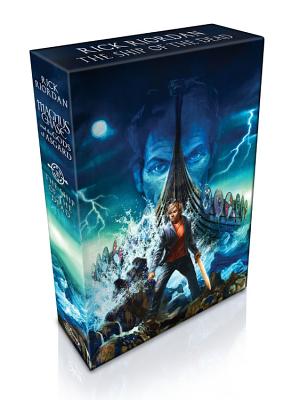 Magnus Chase, a once-homeless teen, is a resident of the Hotel Valhalla and one of Odin's chosen warriors. As the son of Frey, the god of summer, fertility, and health, Magnus isn't naturally inclined to fighting. But he has strong and steadfast friends, including Hearthstone the elf, Blitzen the dwarf, and Samirah the Valkyrie, and together they have achieved brave deeds, such as defeating Fenris Wolf and battling giants for Thor's hammer, Mjolnir. Now Magnus and his crew must sail to the farthest borders of Jotunheim and Niflheim in pursuit of Asgard's greatest threat. Will they succeed in their perilous journey, or is Ragnarok lurking on the horizon?
This limited numbered and signed edition comes in a full-color slipcase, has special endpapers, and includes exclusive frontispiece art by series illustrator John Rocco.

Rick Riordan, dubbed "storyteller of the gods" by Publishers Weekly, is the author of five #1 New York Times best-selling middle grade series with millions of copies sold throughout the world: Percy Jackson and the Olympians, The Heroes of Olympus, and the Trials of Apollo, based on Greek and Roman mythology; the Kane Chronicles, based on Ancient Egyptian mythology; and Magnus Chase and the Gods of Asgard, based on Norse mythology. Rick collaborated with illustrator John Rocco on two #1 New York Times best-selling collections of Greek myths for the whole family: Percy Jackson's Greek Gods and Percy Jackson's Greek Heroes. Rick lives in Boston, Massachusetts with his wife and two sons. Follow him on Twitter at @camphalfblood. John Rocco (www.roccoart.com) studied illustration at Rhode Island School of Design and The School of Visual Arts. In addition to writing and illustrating several of his own picture books, including Blizzard and the Caldecott Honor-winning and New York Times best-selling Blackout, he has created all the cover art for Rick Riordan's series. He has also illustrated books by Whoopi Goldberg and Katherine Patterson, and he recently co-authored a novel, Swim That Rock, with Jay Primiano. Before becoming a full-time children's book creator, he worked as an art director on "Shrek" for Dreamworks, and for Disney Imagineering. He lives in Los Angeles.


"The Sword of Summer combines the glory of Norse myth with the joy of Rick Riordan's effervescent world-building. One of Riordan's funniest books-everything from the chapter titles to the wry humor of Magnus Chase will have you chuckling, even as the plot races along at breakneck speed. Check me in to Hotel Valhalla, please. I'll be staying."
—New York Times #1 best-selling author Cassandra Clare


"Norse myths are in right now, and Riordan has the magic touch."
—Booklist


"With an epic plot, engaging (and diverse) characters, and tons of wisecracking humor, Riordan's latest is a page-turner."
—School Library Journal


"A whirlwind of myth, action, and wry sarcasm, perfect for readers hungry for a new hit of that Percy Jackson-type magic."
—Horn Book

PRAISE FOR THE HAMMER OF THOR


"This latest installment in Riordan's Nordic-themed fantasy series is a fast-paced adventure narrative featuring snappy dialogue and a diverse cast of well-developed characters. The author possesses a singular talent for re-creating contemporary teenspeak. An entertaining sequel that will whet fans' appetites for the next installment."--
—Kirkus Reviews

PRAISE FOR THE HAMMER OF THOR


"There's some crossover with characters from Riordan's other series, and the ending promises more overlap in future installments. A surefire hit."
—Booklist