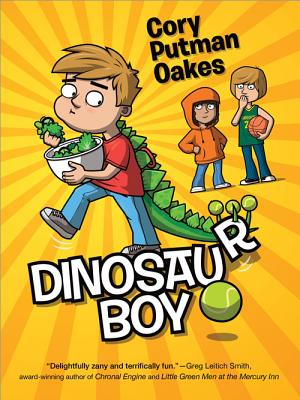 This is book number 1 in the Dinosaur Boy series.

Everyone knows the dinosaur gene skips a generation.

So it isn't a complete surprise when Sawyer sprouts spikes and a tail before the start of fifth grade. After all, his grandfather was part stegosaurus.

Being a dinosaur is pretty cool, despite a sudden craving for vegetables. Except some of the kids at school aren't too thrilled with his spikey tail - even if he covers them with tennis balls. Sawyer is relieved when a couple of the bullies mysteriously stop coming to school, until he discovers a secret more shocking than Dino DNA The disappearing kids are in for a galactically horrible fate...and only Sawyer, with the help of his friends Elliot and Sylvia, can rescue them.

"A hilarious adventure and as sharp as a stegosaurus's tail...fantastic." --Nathan Bransford, author of Jacob Wonderbar and the Cosmic Space Kapow on Dinosaur Boy

"Funny, fast-paced, and filled with surprising twists, Dinosaur Boy is a charming story... will have boys and girls roaring for more " -Nikki Loftin, author of The Sinister Sweetness of Splendid Academy and Nightingale's Nest