Tearing Down the Lost Cause: The Removal of New Orleans's Confederate Statues (Hardcover) 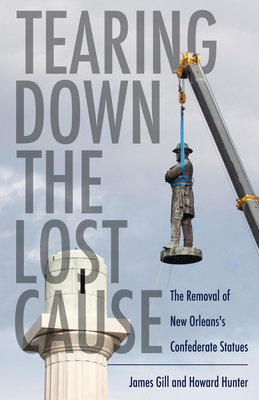 In Tearing Down the Lost Cause: The Removal of New Orleans's Confederate Statues James Gill and Howard Hunter examine New Orleans's complicated relationship with the history of the Confederacy pre- and post-Civil War. The authors open and close their manuscript with the dramatic removal of the city's Confederate statues. On the eve of the Civil War, New Orleans was far more cosmopolitan than Southern, with its sizable population of immigrants, Northern-born businessmen, and white and Black Creoles. Ambivalent about secession and war, the city bore divided loyalties between the Confederacy and the Union. However, by 1880 New Orleans rivaled Richmond as a bastion of the Lost Cause. After Appomattox, a significant number of Confederate veterans moved into the city giving elites the backing to form a Confederate civic culture. While it's fair to say that the three Confederate monuments and the white supremacist Liberty Monument all came out of this dangerous nostalgia, the authors argue that each monument embodies its own story and mirrors the city and the times. The Lee monument expressed the bereavement of veterans and a desire to reconcile with the North, though strictly on their own terms. The Davis monument articulated the will of the Ladies Confederate Memorial Association to solidify the Lost Cause and Southern patriotism. The Beauregard Monument honored a local hero, but also symbolized the waning of French New Orleans and rising Americanization. The Liberty Monument, throughout its history, represented white supremacy and the cruel hypocrisy of celebrating a past that never existed. While the book is a narrative of the rise and fall of the four monuments, it is also about a city engaging history. Gill and Hunter contextualize these statues rather than polarize, interviewing people who are on both sides including citizens, academics, public intellectuals, and former mayor Mitch Landrieu. Using the statues as a lens, the authors construct a compelling narrative that provides a larger cultural history of the city.

James Gill is a writer and a columnist who worked for the Times-Picayune in New Orleans, Louisiana, before joining the staff of The Advocate. He is author of Lords of Misrule: Mardi Gras and the Politics of Race in New Orleans, published by University Press of Mississippi. Howard Hunter is a native of New Orleans and a history teacher of thirty-six years. He has published articles on New Orleans and the Civil War for both academic and general audiences. He is past president of the Louisiana Historical Society.