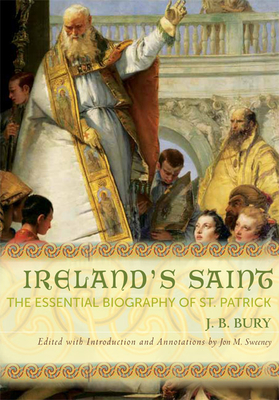 Explore Patrick’s place in history, the spread of Christianity beyond the Roman Empire, how Patrick first came to Ireland, the influence of the earlier Palladius on Patrick’s work, political and social conditions at that time, and the spiritual battles with the Druids. This 21st century edition includes notes from other notable biographers, mystics, historians, and storytellers of Ireland and is an ideal place to begin any exploration of this much loved but little-known saint.

[This book was previously published in hardcover and trade paperback and is now available in this smaller format, with a new cover design, for the first time.]

J. B. Bury (1861-1927) was an Irish historian, an expert on the Greek and Roman Empires, and the prestigious Regius Professor of Modern History at Cambridge University.

Jon M. Sweeney is an author, husband, and father of four. He has been interviewed on many television programs including CBS Saturday Morning, Fox News, and PBS's Religion and Ethics Newsweekly. His popular history The Pope Who Quit: A True Medieval Tale of Mystery, Death, and Salvation was optioned by HBO. He's the author of thirty-five other books, including The Complete Francis of Assisi, When Saint Francis Saved the Church, the winner of an award in history from the Catholic Press Association, and The Enthusiast: How the Best Friend of Francis of Assisi Almost Destroyed What He Started. Sweeney is also the author of The Pope's Cat series for children. He presents often at literary and religious conferences, and churches, writes regularly for America in the US and The Tablet in the UK, and is active on social media (Twitter @jonmsweeney; Facebook jonmsweeney).

“Bury and Sweeney have studied St. Patrick and the culture surrounding him. They are able to present an extensive portrait of St. Patrick beyond the myth that surrounds him.” —St. Anthony Messenger

“Bury proves to be more than a mere dry historian; he turns out to be a fine storyteller as well, and his accounts of Patrick's spiritual duels with Druid priests for the heart and mind of the Irish king are quite gripping.” —History Book Club