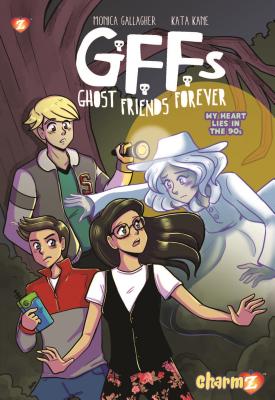 Sophia Campos is only just getting used to her new life with her divorced dad and managing their business of helping ghosts, when she meets a ghost girl who changes everything. Not because she’s a ghost - but because of what it brings out in Sophia.

Soon her brother, her best friend, her old crush Jake, and her parents are all entangled together on solving the case of the dead girl. Because she’s not just any average ghost girl. She also holds a piece of the puzzle to something Sophia cares about very much -what was the paranormal event that caused her parents to split up in the first place?

MONICA GALLAGHER is an indie creator with over ten years experience making comics and illustrations with a positive, feminist spin. She has worked for Oni Press, Vertigo, andValiant, and as well as self-published several of her own mini-comics and books

KATA KANE is an illustrator, designer, and comic book artist best known as the creator of "Altar Girl," an all-ages manga style graphic novel and ongoing webcomic series commended as the "cute shoujo manga with a spine of steel!" (Girls Like Comics)