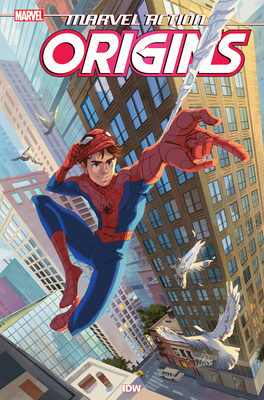 From Spider-Man to Loki, and more faces in between, these kid-friendly stories put the action, adventure, and fun of big budget Hollywood in the palm of your hand.

Discover the secret histories of the Marvel heroes you love and the villains you love to hate! New takes on the classic origin stories of your favorite characters, suitable for young readers. A science exhibit and a spider bite change Peter Parker's life forever when he becomes Spider-Man! The seemingly unstoppable cosmic conqueror Thanos embarks on his path to take over the galaxy! Pilot Carol Danvers finds a new destiny as the strongest Avenger, Captain Marvel! Norman Osbourne begins a life of crime as the sinister Green Goblin! Plus the Hulk, Venom, and more!

MCU fans of all stripes can find their favorite characters in these middle-grade adaptations of the famous origin stories of Marvel Comics' most iconic heroes and villains.

Chris Eliopoulos has worked in every aspect of comic book creation. He's most known as a prolific letterer, but in recent years has begun writing and drawing comics, some of which have been nominated for Eisner and Harvey awards. He's created books like Franklin Richards: Son of a Genius and the Pet Avengers for Marvel. He's also created a webcomic called Misery Loves Sherman.

Lanna Souvanny is a French Artist living in Vancouver BC. She co-created the comic story Noah Zark--with the legendary Mark Waid--which was featured in the first issue of Steel Cage, published by Ahoy Comics. She is currently working on the ongoing series. At the same time, she worked at animation studio TAT Productions on the feature film Les Aventures de Pil as a character designer and 2D background artist. She's also produced covers for Steven Universe (Boom! Studios) and My Little Pony: Friendship is Magic (IDW Publishing).