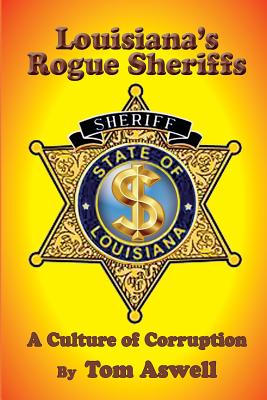 “Of the millions of words that have been spoken and written about political power brokers in America, one local entity has been consistently overlooked,” the author explained. “America’s sheriffs fly under the political radar but the work they do on behalf of or in opposition to a candidate can—and often does—determine the outcome of elections. Candidates for offices from U.S. Senate to governors and state legislators actively solicit the endorsement of sheriffs’ associations and success at the polls often is determined by whether or not those endorsements are forthcoming. Other than on sporadic occasions, no one has ever written anything about the power of and abuses committed by Louisiana sheriffs. Until now.”

Older than the presidency, the office of sheriff pre-dates the republic itself by more than a century. The office is accountable solely to the U.S. and state constitutions—to the specific exclusion of the president, congress, and the governor, making the sheriff the single most powerful person in a county or parish. The late Louisiana political writer John Maginnis recognized that power when he wrote that only two elected offices really mattered in Louisiana: governor and sheriff.

“That much power wielded by sheriffs possessing a general lack of qualifications often leads to abuses that often go unreported,” Aswell said. “There has never been anything written about the power of and abuses committed by Louisiana sheriffs in such depth and detail before now. My book shines the spotlight on cases of abuse, malfeasance, theft, murder and official protection of—and in some cases, actual participation in—gambling and prostitution.”

Among the specific cases Aswell unveils in the book:

The sheriff of a north Louisiana parish and his chief deputy were actively involved with the Ku Klux Klan and figured in no fewer than eight civil rights murders in the 1950s.
A south Louisiana sheriff was indicted by a federal grand jury for physical and mental abuse of African-American prisoners in his jail, only to be acquitted, even as several of his deputies were convicted.
A former north Louisiana sheriff was sentenced to federal prison following his conviction of drug trafficking.
One former sheriff is said to have been a bag man for Mafia boss Carlos Marcello.
A current sheriff obtained a warrant to raid the home of an internet blogger whose only offense was posting remarks critical of the sheriff.
A sheriff defeated for reelection by a former deputy planted a bomb that blew off the foot of his successor.
A north Louisiana sheriff and a district attorney conspired to convict a national rodeo champion for a double murder that he did not commit.
A Shreveport Commissioner of Public was directly involved in the shotgun murder of a public relations consultant who had worked in his re-election campaign.
Three consecutive sheriffs of one Louisiana parish were sentenced to prison terms.
Aswell published two previous books with Pelican Publishing: Louisiana Rocks: The True Genesis of Rock & Roll, and Bobby Jindal: His Destiny and Obsession. Additionally, he edited books for two other authors: With Edwards in the Governor’s Mansion: From Angola to Free Man, by Forest Hammond-Martin, Sr., and Smuggler’s End: The Life and Death of Barry Seal, by retired FBI agent Del Hahn.

Tom Aswell has won numerous awards for breaking news, feature and investigative reporting during a distinguished career as a reporter for The Shreveport Times, the Monroe Morning World, the Shreveport Journal and the Baton Rouge State-Times, and as managing editor of the Ruston Daily Leader. He currently publishes the political blog LouisianaVoice, an online publication dedicated to exposing political corruption at all levels. A native of Ruston, LA and a 1970 graduate of Louisiana Tech, he lives with his wife, Betty, in Denham Springs, LA.

Tom’s meticulously researched book documenting the self-serving decisions, arrogance and greed that led to the downfall and political ruin of several Louisiana sheriffs is an enjoyable read for anyone but should be required reading for public servants everywhere.

If you want to understand what makes Louisiana a law unto itself, you need to read this book.

Tom Aswell is an expert guide to the rogue’s gallery of Bayou State lawmen who ruled Louisiana parishes for too long.

As a former sheriff, I personally knew many of the deceased “legends,” and of course, most of the living. I should mention that I am ecstatic that I didn’t make the cut to be included in its cast of characters.

Those familiar with Tom Aswell’s work will know he is meticulous in his research. I recommend this book to anybody seeking insight into our justice system, particularly the law enforcement side and specifically sheriffs.