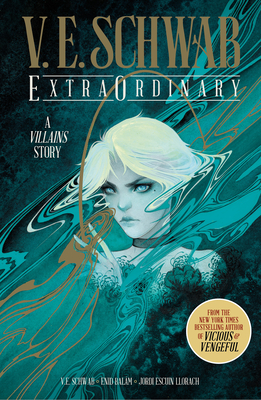 Written by #1 New York Times bestselling author V.E. Schwab, this all-new story is set in the five years between VICIOUS and VENGEFUL.

Set in the years between VICIOUS and VENGEFUL, "ExtraOrdinary" follows a teenage girl named Charlotte Tills who survives a bus crash and becomes EO--ExtraOrdinary, gaining the ability to see people's deaths in reflective surfaces. But when she looks into her own future, she sees a murder. The man responsible? None other than self-proclaimed hero and notorious EO killer Eli Ever, currently in prison for the murder of Victor Vale. Refusing to accept her fate, Charlotte pieces together what little she can glean from the reflections and sets off to find--and change--her future--before it comes for her.

This collection also includes the special World Comic Book Day, issue #0, which serves as a primer on Eli Ever, the antagonist at the heart of the Villains series, and the hunter at the heart of this comic arc.

V. E. Schwab’s first adult novel, Vicious, debuted to critical praise and reader accolades. She is the author of the NYT bestselling Shades of Magic series, as well as a number of MG and YA novels, including This Savage Song. She has been called "the heir to Diana Wynne Jones." Her dynamic work has caught the attention of major TV and film studios.

Schwab has a Masters degree in Art History from the University of Edinburgh. She currently lives in Nashville, TN, but frequents Edinburgh.


Enid Balam began his career in 2015 as a colourist working for Delcourt, before finding work as a penciler and inker working for the likes of Humanoid, and Sergio Bonelli. His first graphic novel, Someday Comes Paradise was published in 2018.