Inside The Mind of Sherlock Holmes (Hardcover) 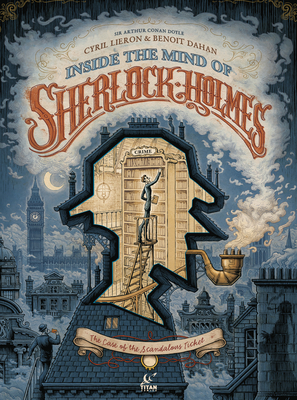 Sherlock Holmes fans can sink their teeth into this brand new original tale, which uniquely portrays the inner workings of the greatest detective’s mind as he works to solve the case!

A visually stunning treat, every thought and clue that flows through Sherlock’s mind is thoroughly explored and displayed in the art for readers to latch onto. Put on your deerstalker and pull out your magnifying glass, there’s a mystery to be solved!

Set in the Victorian era, the discovery of a mysterious powder on some clothing and a very special show ticket leads Sherlock Holmes to believe a patient isn't the only victim of a grand conspiracy.
Indeed, it seems the strange disappearance of Londoners can be explained by the performances of a Chinese magician. When other tickets are found, the detective's suspicions are confirmed…

Benoit DAHAN, screenwriter, designer and colorist, lives in Paris. After studying Graphic Arts at ESAG, he embarked on illustration for the press (Le Monde, Liberation, Le Point, Science et vie junior) and children's books. Psycho-Investigateur is his first comic book series, which he produced with his friend Erwan Courbier. His love for Sherlock Holmes, shared with Cyril Liéron - another long-time friend - naturally spurred the fruit of their collaboration. Inside the Mind of Sherlock Holmes, published by Ankama Editions, received the BDGest Arts 2019 award for best cover.