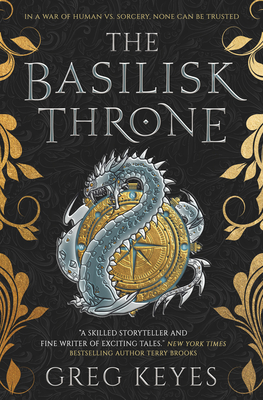 Master and Commander meets A Game of Thrones and Pirates of the Carribean. Rapid-paced high fantasy with all-out combat on the high seas, and a canny young woman who faces the hidden threats of an imperial court. Yet the key to defeating a sorcerous enemy may lie with a wild rogue and the slave of a maniac.

For centuries those on the Basilisk Throne have ruled every continent, brutally enslaving the human inhabitants. But now, after endless wars, the three human empires of Ophion, Velesa, and Modjal have pushed the inhuman Drehhu back to their heartland and are united in one final, massive assault to defeat them forever. It’s been tried before, but the infernal weapons and dark magic of the Drehhu have always triumphed. Basilisk has never fallen.

Commanding his merchant fleet in support of the human forces, Alastor Nevelon and his son Crespin set sail against the enemy—and this time they have their own secret weapons. The Drehhu, however, do not have a monopoly on deceit. or ambition. Alistor is forced to send his daughter Chrysanthe to the capitol city Ophion Magne as a "token" of his loyalty. He does so freely, for he is certain of treachery within the very empire he serves. After all, whomever controls the Basilisk Throne can control the world. He instructs Chrysanthe to use her considerable intellect to discover whatever plots may be afoot in the heart of Ophion.  Chrysanthe agrees, knowing that in doing so she enters a dangerous place where courtly manners hide murderous intentions.

While nations collide and the conflict explodes, the true key to defeating the Drehhu may lie in a remote mountain stronghold, a wild rogue known as Hound, and Ammolite, the young slave of a sorcerer more ancient than any nation and whose true loyalties are entirely unknown.

Exposed at an early age to cultures and stories of the Native Southwest, New York Times bestselling author Greg Keyes has written novels in some of the top pop culture worlds, including Star Wars, Interstellar, Planet of the Apes, The Elder Scrolls, and Godzilla: King of the Monsters. His acclaimed original fantasy novels include The Waterborn, the Kingdoms of Thorn and Bone tetralogy, and the ground-breaking Age of Unreason series.

“Here is a high fantasy novel that has the grit of secular combat and the heart of one of the great romances.”—Fantasy and Science Fiction Magazine on The Briar King

“Recommended… Keyes’s talent for world crafting and storytelling make this series opener a strong addition to fantasy collections.”—Library Journal on The Briar King

“Keyes takes all the genre’s conventions and, while never overstepping their boundaries, breathes new life into them.”—Kirkus Reviews on The Briar King

“Keyes is a master of world building and of quirky characters who grow into their relationships in unexpected ways.”—Booklist on The Reign of the Departed

“Greg Keyes has always been both a skilled storyteller and fine writer of exciting tales.”—Terry Brooks, author of The Sword of Shannara

“Starts in the realm of normalcy and quickly descends into the favorably bizarre and surprising… there was not one character that was uninteresting. The world building is epic.”—Koeur’s Book Reviews on The Reign of the Departed

“[A] sophisticated and intelligent high fantasy epic.”—Publishers Weekly on The Blood Knight

“A graceful, artful tale from a master storyteller.”—Elizabeth Haydon, bestselling author of Prophesy: Child of Earth, on The Briar King

“The characters in The Briar King absolutely brim with life… Keyes hooked me from the first page.”—Charles de Lint, award-winning author of Forests of the Heart and The Onion Girl