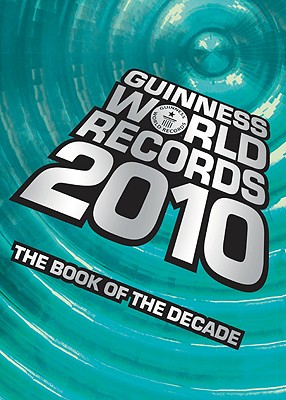 Guinness World Records 2010 continues to build on the intriguing, informative, inspiring and instructional records and superlatives that have made Guinness World Records one of the most famous brands and an annual best-seller around the world. Over 100 million copies have sold since the first edition was published in 1955. Nearly 4 million copies are sold every year in more than 100 countries and in 25 languages. What's new in GWR10?... - Free downloadable content, including videos, photographs, screensavers and interviews
- 100% new photographs and fully updated records
- Brilliant new "steampunk" graphic novel design
- New sections and record threads celebrating the first decade of the 21st century
- Top 50 Records of the Decade
- Record of the Day - one for every day of the year
- Unbreakable Records (those that will seemingly never be broken)
- Lasts (records such as the last living survivor of the Titanic disaster, or the last known dodo)
- The Name's Bond (celebrating the James Bond phenomenon)
- Culture Shock (unusual rituals and festivals around the globe)
- Gold (the commodity that never loses its luster)
- Updated gazetteer sections covering records in all major regions of the world
- Fully updated regular sections, including Space, Planet Earth, The Animal Planet, The Body, Human Achievements, Engineering and Technology, The Modern World, Arts and the Media and, of course, Sports.