The Bourbon Street Band Is Back (Shankman & O'Neill) (Hardcover) 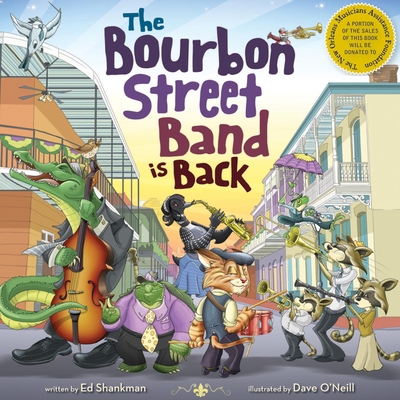 Award-winning author and illustrator duo Ed Shankman and Dave O'Neill turn to the birthplace of jazz, New Orleans, Louisiana Jazz, of course, is the only truly American form of music, born from a meeting and mixing of cultures where the mighty Mississippi meets the Gulf of Mexico. Drummer Bobcat Bob leads a hot band of multi-cultural musicians, featuring a gator on bass, a finger-snapping frog, and a horn section made up of raccoons, a crayfish, and some loons. Bobcat Bob's band is known for miles around - They played like wind. They played like fire. They raised the roof, and raised it higher. They played all night and weren't done, 'Til morning came and they raised the sun. But one day the music stopped and the great New Orleans lost its voice. Through months of darkness and sadness the people wished that things were like before. And with a single drum beat on Bourbon Street, and then another, and another, the music came back to New Orleans, better than ever Children and parents alike will love this story about the healing power of music.

A portion of the proceeds from the sale of this book will be donated to the New Orleans Musicians Assistance Foundation.

Ed Shankman was born in the Bronx, New York, and lives today in Verona, New Jersey. As a creative director in the advertising industry, he has directed creative efforts for some of the world's best-known companies. Beyond the office, he has always spent his time chasing creative inspiration as a writer, guitar player, and painter. With illustrator Dave O'Neill, he has created four winning children's titles for Commonwealth Editions.Dave O'Neill made his published debut with The Boston Balloonies, alongside longtime friend and wordsmith Ed Shankman. Dave has worked as a graphic designer and illustrator since receiving his bachelor of fine arts (BFA) from William Paterson University in 2001. A native of Mount Olive, New Jersey, he now hangs his hat and sharpens his pencils in Montclair.

"There are so many things that my kids and I love about the Shankman and O'Neill books . . . The writing is so creative and easily flows as you read it. My 4 year old usually has the book memorized after I read it to her just a few times! The illustrations are, of course, absolutely beautiful! But it's when you put it all together that you get pulled into the story, making you want to read it again and again and making you want so badly to visit that place. I think that's what I love most about these books - the stories are fun but each book takes place in a real place!"  -5minutesformom.com