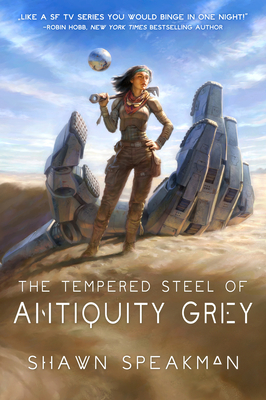 Antiquity Grey is born into the life of an outcast. "Grey-shamed" by the rulers of her city, and bullied by other members of her community, she is determined to prove her worth. With the help of friends and former enemies, she takes on the greatest threat of all; The Imperium.

This was a fast-paced thrill ride through a climate-changed world filled with giant robots and bad guys with swords and laser guns. Myth and tech collide, creating the perfect recipe for a science fantasy adventure.

Forever shamed for family actions a century earlier, Antiquity Grey is a young woman living in a far-future city of Erth. It is a life of danger and hardship, dragons and advanced technology.

But when she discovers an outlawed and operational mech buried in the sands of her planet, she realizes its secrets hold the power to reverse her family's dishonor while challenging the Imperium's off-world oppressive might. The Imperium is not so willing to loosen its grip, needing Erth's valuable titanium resources at a time when war spreads among the stars. In response, the Governor of Erth sends Star Sentinel--his mightiest mech, which nothing can stand against--after Antiquity.

As she flees into the wilderness in a desperate attempt to uncover the secrets of her past and free an entire planet, Antiquity learns friendship can mean more than family, even the hardest heart of an enemy can soften, and adventure is not what she thought it would be.