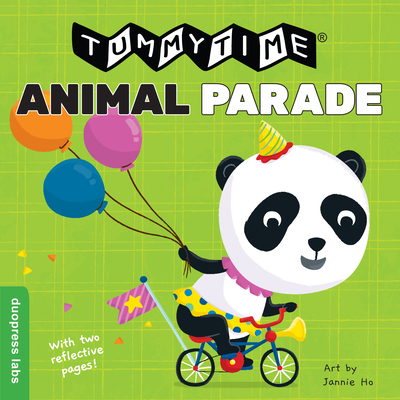 Make the best of tummy time with your baby with this two-in-one fold-out book of colorful animals and high-contrast black and white!

This small and sturdy accordion book opens up to stand alone in a crib, on the carpet, or on a bed, making it easy for your baby to enjoy tummy time, all the time. One side features vibrantly illustrated creatures marching merrily along (an alligator bangs a big drum, a bear carries festive balloons) and the opposite side includes high-contrast black and white patterns and animals, perfect for baby’s developing eyes. And with two reflective pages your baby can see him- or herself and practice those future smiles! Since the American Academy of Pediatrics and other top pediatric organizations around the world recommend tummy time to help “build the strength and coordination needed for rolling over, crawling, reaching, and playing” this book is not just fun, it’s also good for your baby. Also available: TummyTime™: Happy Baby.

duopress labs is the creative team, led by Mauricio Vela´zquez de Leo´n, responsible for writing and developing dozens of books and games. Recent titles include The Belly Sticker Book; and the SmartFlash and TummyTime™ series, 100 Pablo Picassos; My Fridge; and My First Lift-the-Flap Animal Book. Mauricio has written for Lonely Planet, Chouette, PowerKids Press, and the magazines Gourmet and Saveur. He resides wherever he can find a good wi-fi connection and strong coffee, mostly in the eastern United States.

Born in Hong Kong and raised in Philadephia, Jannie Ho received her BFA in illustration from Parsons School of Design in New York. After graduating, she worked as an in-house graphic designer at Nickelodeon, Scholastic, and an art director at TIME Magazine for Kids. Jannie is the author/illustrator of the picture book Bear and Chicken, and has illustrated numerous board and novelty books. Her artwork also appears in toys, stationery, and digital media. Jannie lives with her family near Boston, MA. Visit her at www.JannieHo.com