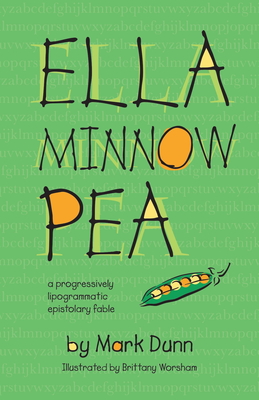 In this special anniversary edition, Mark Dunn is joined by talented illustrator Brittany Worsham in an illuminating, beloved story relating to language and freedom and human dignity in an era of political oppression.

First published by MacAdam/Cage in 2001, Mark Dunn's novel Ella Minnow Pea celebrates its twentieth anniversary under the roof of Penguin/Random House and the British publisher Methuen. Over the years it has become a mainstay of book clubs and middle-school and high-school English classes, has inspired a stage musical LMNOP, and is the recipient of multiple accolades, including winning the 2001 Borders Original Voices competition for fiction.

Set on a fictional island off the coast of South Carolina, Ella Minnow Pea takes readers to the homeland of the late Nevin Nollop, the inventor of the pangram "The quick brown fox jumps over the lazy dog." Lionized for this achievement, he's been honored with a monument featuring this famous phrase. But life for Nollopians drastically changes when the tile containing the letter "z" topples from the statue and island authorities interpret the fall as a message from Nollop from beyond the grave. They waste no time in banning this letter from all use. As other tiles fall, additional laws are passed which put increasing communicational constraints on the islanders, and ultimately undermine all the freedoms they had heretofore taken for granted. It is up to a young woman named Ella to restore order and sanity to the nation of Nollop, using the very tools used by Mr. Nollop to win the day.

Readers, both longtime fans of the book and those newly discovering its power and literary merit, will cherish this special keepsake edition.