When She Was Good (Cyrus Haven Series #2) (Paperback) 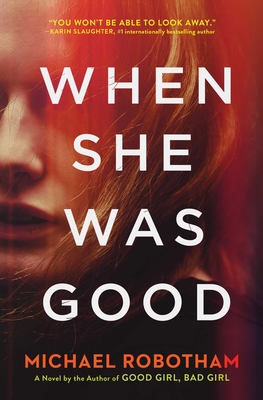 This is book number 2 in the Cyrus Haven Series series.

From the bestselling author of Good Girl, Bad Girl and When You Are Mine comes a gripping thriller featuring the brilliant forensic psychologist Cyrus Haven as he becomes embroiled in an explosive murder case with disturbing origins.

Who is Evie, the girl with no past, running from? She was discovered hiding in a secret room in the aftermath of a terrible crime. Her ability to tell when someone is lying helped Cyrus crack an impenetrable case in Good Girl, Bad Girl. Now, the closer Cyrus gets to uncovering answers about Evie’s dark history, the more he exposes Evie to danger, giving her no choice but to run. Ultimately, both will have to decide if some secrets are better left buried and some monsters should never be named...

Michael Robotham is a former investigative journalist whose bestselling psychological thrillers have been translated into twenty-five languages. He has twice won a Ned Kelly Award for Australia’s best crime novel, for Lost in 2005 and Shatter in 2008. His recent novels include When She Was Good, winner of the UK’s Ian Fleming Steel Dagger Award for best thriller; The Secrets She Keeps; Good Girl, Bad Girl; When You Are Mine; and Lying Beside You. After living and writing all over the world, Robotham settled his family in Sydney, Australia.

“[A] powerhouse of a novel. . . . The whole enterprise is enriched by wonderfully cadenced prose that almost invites one to feel its texture. It's rare to be overawed by the writing in scenes of violence and danger, but...this one's a jewel, and readers who don't know Robotham should immediately catch up.” —Booklist, STARRED review

“[A] page-turner from the start. . . . When She Was Good makes a desperate plea for the forces of love and justice to prevail." —New York Journal of Books